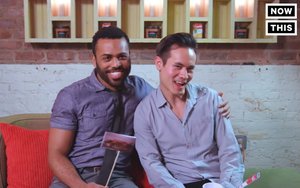 Campbell Soup is playing Cupid in its latest effort to woo Millennials.

The brand has partnered with NowThis News to create a soup-driven dating show, document the results in a four-episode video series, and distribute it through mobile and social media channels.

The campaign is currently live on NowThis’s Facebook and YouTube channels, and will also run on Snapchat and Instagram. In total, the news platform pulls 2.6 million views per month, according to Campbell. MEC is the media agency for the campaign.

The premise, as described in the branded content: Experts say that couples who focus on eating together stay together, so Campbell put this to the test by matching up singles based on their food preferences.

Singles were asked: “If you were a soup or a sandwich, what kind would you be, and why?” Then the brand invited strong preference matches to go out on a first date and filmed the experiences.

The “measurable content” social series “celebrates the relationship and commonalities people have with food and each other,” Amy Benford, senior manager of global media at Campbell Soup Company, tells Marketing Daily.

The other three episodes will be released on Feb. 25, March 8 and March 19.