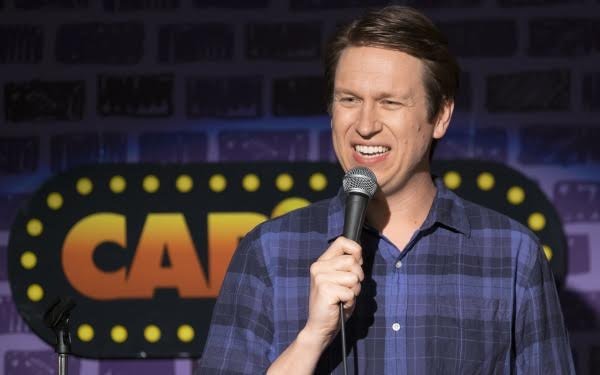 The best parts of HBO’s new Pete Holmes comedy series are the scenes in comedy clubs.

These dank, claustrophobic, malodorous dens of brick-wall backgrounds and squeaky chairs are the places Jerry Seinfeld once described (in his 2002 documentary “Comedian”) as the “smelly gyms” of show business.

In this new series called “Crashing” -- premiering Sunday night -- the depiction of these places has a dead-on accuracy. That’s due as much to the places themselves (the comedy club scenes are filmed in real ones) as the people who populate them.

It’s the portrayals of the people who work in these clubs that never ceases to amaze in movies and TV shows about this particular area of the comedy business.

No wonder comedians suffer. These club managers are almost always the most aloof, antisocial, uncaring people you could ever imagine encountering. If they were in positions of superiority or authority in any other “normal” workplace environment such as an office, they would be so reviled that their staffs would mutiny.

In one scene in “Crashing,” the comedian Pete Holmes (who plays himself in the show), tries good-naturedly to get one such manager to write down his email address.

This “conversation,” in which Holmes is basically ignored by the man (who for ridiculous reasons can’t be bothered to lift a pencil to write down Holmes’ address), is one of the best scenes in the first two episodes of this show that HBO provided for preview.

“Crashing” tells the fictionalized story of Holmes (pictured above), who in the show is a struggling but hopeful comedian.

He lives in a New York City suburb, supported financially by his wife since he has yet to earn any money from the almost nightly forays he makes into New York City for various open-mike comedy opportunities for which he is almost never paid.

One afternoon upon returning home unexpectedly, he discovers his wife in bed with a family acquaintance, and his marriage and his life are suddenly shattered. Leaving home, he makes his way back to the city, where he meets a succession of comedians who let him “crash” in their apartments.

In the first two episodes, the comedian Holmes latches onto is Artie Lange, who is one of those comedians whose every statement comes across as funny, whether he’s trying to be funny or not.

These kinds of TV shows about the ins and outs of comedy work best according to the real-life comedians who agree to be in them. One of the best of these was the old animated show on Comedy Central called “Dr. Katz.”

On “Crashing,” the real comedians after Lange will include T.J. Miller, Dave Attell, Hannibal Buress, Sarah Silverman and Jim Norton.

Holmes is well-cast as the “sad sack” character at the center of this show. While he seems quite comfortable in the shabby surroundings of the comedy clubs where he pursues his dream of making it as a stand-up comic, he is at the same time too naïve to recognize when people are dismissing him or taking advantage of him.

Since this is an HBO show, sex is a big part of it. In “Crashing,” the Holmes character is depicted as repressed in this area, which is why his wife strays from him. He’s uncomfortable when women tell him they want sex.

As such, he’s playing a character whose history in motion-picture comedy must date back as far as the silent era -- the well-meaning, “nice” guy who suddenly becomes a nervous jellyfish when women come on to him.

Whatever ups and downs Holmes has experienced in his real-life comedy career, you can count this show as one of the ups.