Multicultural marketing has created a marketing economy based on segmenting the population by ethnicity. While ethnicity segmentation has worked for the past several decades, as I pointed out in an earlier column, that foundation is starting to crack. Our industry is experiencing a paradigm shift. As we attempt to make sense of this existential crisis of marketing models, we should consider how we segment and why.

We recently teamed up with the AHAA to present a webinar taking a closer look at affluent Hispanics. Using data we pulled from our most recent Consumer Sentiment study, we isolated Hispanics earning 70K+ in Household Income per year. When we compared that data to General Market data, we saw striking similarities. This made me ask the question, should affluent Hispanics be considered General Market?

Let’s delve further into the data to find out.

We asked a representative sample of Total Market, Hispanic, African-American, Asian, and non-Hispanic Whites to think about the U.S. economy in general and their feelings about where things are heading in 2017. The below is a chart outlining respondents that indicated that the economy in 2017 would be better than 2016: 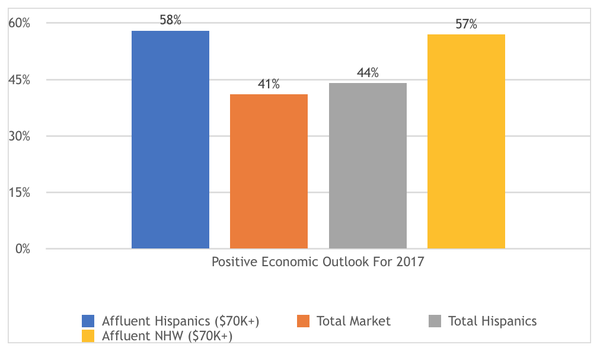 This is a powerful finding for marketers who segment on ethnicity alone. Economic sentiment, specifically positive sentiment, has big implications on purchase intent. With Affluent Hispanics having a significantly different outlook than Hispanics as a whole and more aligned with their Affluent Non-Hispanic White counterparts, what does this mean for multicultural marketing in 2017?

Consumer durable goods purchases are traditionally a good marker of purchase behavior at large. Looking at major purchases that people might buy for themselves or their family in the next 12 months gives us insights into how positive economic sentiment may translate into real-world purchase habits: 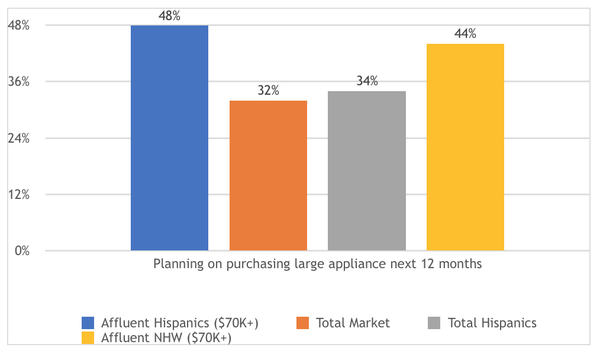 We see similar statistical relationships play out in next 12-month purchase behavior among the different groups as we did in the positive economic outlook. Affluent Hispanics are much more likely than the Total Market and Total Hispanics to purchase a large appliance in the next 12 months. Again, their purchase behavior more closely resembles Affluent non-Hispanic whites with 48% of Hispanics stating that they plan on purchasing a large appliance in the next 12 months and 44% of non-Hispanic Whites stating the same.

While these two data points on their own do not answer the question of whether we should consider Affluent Hispanics as General Market, they do point to some flaws in the tendency for multicultural marketers to segment solely by ethnicity or race.

Income, especially when it comes to purchase intent and economic sentiment are key drivers in creating common behavior cohorts. Having a myriad of key demographic and behavioral measurement tools in the multicultural marketer’s tool chest should be a common practice moving forward.

I understand the tendency to want to segment solely by ethnicity as anything else could point to the end of multicultural marketing as we know it. However, I believe the opposite is true. Having multicultural marketers that can segment and target beyond the standard breaks make them more valuable to organizations and brands thus helping the industry stay relevant in a fragmented marketing world.