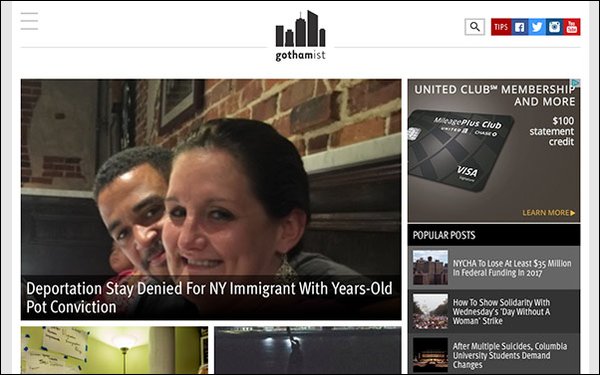 All the Gothamist sites—including LAist in Los Angeles, SFist in San Francisco, and DCist in Washington, DC—will keep their URLs, and integrate relevant content from DNAinfo.

DNAinfo was founded by Republican businessman and donor Joe Ricketts in 2009, following by the Chicago site in 2012. He donated more than $1 million to President Donald Trump’s campaign and is the founder of online broker company TD Ameritrade.

In a note to readers, Gothamist cofounders Jen Chung and Jake Dobkin wrote: “While our politics and backgrounds may differ a bit from those of DNAinfo founder Joe Ricketts (he, for example, is a Cubs fan, while Mr. Met is our favorite baseball figure), we are all committed to building a news organization that offers quality journalism to our readers.

"We all believe that unbiased reporting is important for our democracy, especially in these times. And we all think that the best way to cover contentious issues is to offer opinions from both sides.”

Dobkin told the Observer that Ricketts’ history as a Republican donor is not an issue, given that DNAinfo “plays it straight with the news.” He said Ricketts wants to add an opinion section to the site for liberals and conservatives to debate city issues.

In the note to readers, Chung and Dobkin said it was time to “take our growth to the next level.” DNAinfo “offers us that opportunity.” "Joe Ricketts shares our belief in the importance of neighborhood news and the conviction that unbiased reporting is critical to our democracy,” Dobkin stated.

Dobkin will be named DNAinfo’s vice president for strategy and expansion. Both will report to Dan Swartz, who has been promoted from the company's chief marketing officer to EVP and COO of DNAinfo.

Ricketts stated: “Not only are Gothamist’s reach and sensibility a perfect complement to DNAinfo’s depth and focus, but their experience in developing multiple city blogs fits right in with our vision for future expansion."

Gothamist readers have their fair share of reactions. While the comments section was disabled below Chung and Dobkin’s note, readers took to the comments section of this story about the Statue of Liberty going dark and this one about a New York activist who may face deportation to express their opinions regarding the sale.