Mazda Miata MX-5 Is Fun In Any Weather 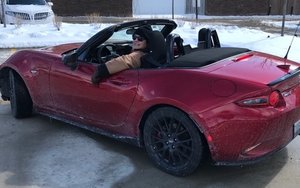 More than 20 million people have viewed the 60-second spot, called “A Driver’s Life,” on YouTube and it continues to resonate. It’s one of those quiet ads that makes you smile and feel good, no matter what your age or life situation.

In a nutshell, it shows the spot’s main character aging from his teen years through mid-life, and how his varying Mazda vehicles were there for him and played a large part in his life. He starts out with a roadster, and after he gets married and has a family, he “graduates” to a sedan and then an SUV. At the end, he lovingly peeks into the garage at his “reward” car, another sporty coupe, a Mazda Miata.

It would be easy to dismiss the ad and its premise as an appeal to those having a mid-life crisis. But why not go back to something you love when you finally have the means to do so? If that’s a midlife crisis, sign me up. There’s nothing wrong with having some fun in your life.

I can relate completely to the ad, even though I’m not a guy and I don’t have kids that prompted me to move away from my sports car beginnings. I got a little taste of the thrill of once again driving a sporty fun car this past week, thanks to the loan by Mazda North American Operations of a 2017 Mazda MX-5 Miata Club. Thankfully, the small red coupe convertible was equipped with Blizzak snow tires, which came in handy since we had a minor snowstorm here in Detroit, dropping about four inches.

It wasn’t exactly convertible weather here, even before the snowstorm, but I couldn’t resist putting the top down for a short drive through a friend’s neighborhood this past weekend. I had to see how easily the manual soft top was to operate. It was quick and didn’t take much effort to put down or back up, once I figured out to pull the handle in between the back of the seats to release it from the compartment. While an electric-top convertible is fun and a convenience when you are putting it down on a fly, the soft top manual has its own retro appeal.

The Miata is fun to drive, both on surface streets and on the freeway. The six-speed manual definitely adds to the driving experience. It handles beautifully on tight curves and accelerates with ease. The price tag is not daunting — its base price is $28,800 and the model I drove with the Brembo/BBS brakes and trim package bumped it up to $33,335.

The car I borrowed, in “Soul Red Metallic,” could be the spirit animal for the Mazda brand, which is all about the joy of driving. As Russell Wager, Mazda’s marketing vice president, told me during an interview at the Chicago Auto Show, Mazda drivers don’t simply drive from point A to point B. They drive from point A to point C and then to point B. In other words, they don’t mind having a little extra time behind the wheel. Their attitude is that driving doesn’t have to be a chore, it should actually be a joy.

There is no denying the incredible sex appeal of this car. I enjoyed watching the reaction it got from pedestrians and other drivers. It caught many eyes and resulted in some smiles, even from a group of elementary school-aged kids, who stopped dead in their tracks and watched me drive by one afternoon. It could have been a scene from a commercial.

There’s a happiness in a small red sports car that can’t be explained with words, but you know it when you are driving it. Mazda, via its marketing, is making sure consumers know that it has more offerings now than it has ever had, including three different-sized SUVs. But there’s no reason for the automaker to not embrace its sports coupe heritage. Zoom Zoom.