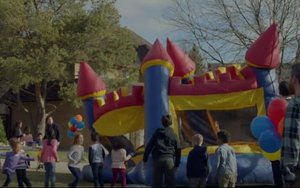 Kraft Macaroni & Cheese is out with new TV spots that play off the popularity of parental “fail” videos and anecdotes on social media.

The “Make It Right” campaign, from Crispin Porter + Bogusky, features three 15-second ads showing parents messing up, but then redeeming themselves by making their kids Kraft Mac & Cheese.

One ad (below) shows a dad overdoing it as he pushes his little girl on a swing. The other ad vignettes feature a dad accidentally deflating the bounce house at his little boy’s birthday party (above), and a mom rooting for what she mistakes as her daughter’s hockey team.

The campaign is also one of several in recent times — notably an “unfiltered” campaign launched in 2015 by Plum Organics — that seek to enhance brand goodwill with parents by reassuring them that there’s no such thing as “perfect” parenting.

In Kraft’s case, the new campaign’s theme was backed by research that found that 93% of Millennial parents feel that “mess-ups are a natural part of parenting”; 60% report that parenting fails happen three times per week on average; and 72% say that giving their kids their favorite meals is “one of the best ways to make it right.”

The campaign looks to build on the positive reaction to Kraft Mac & Cheese’s seamless year-ago transition to a “clean,” no-artificial-ingredients reformulation.

Starting last March, the brand dramatized that the new recipe’s taste is indistinguishable from the much-loved original with a campaign that announced that it had already quietly sold 50 million boxes of the revamped product, and fans hadn’t noticed—a move it called “the world’s largest blind taste test.”