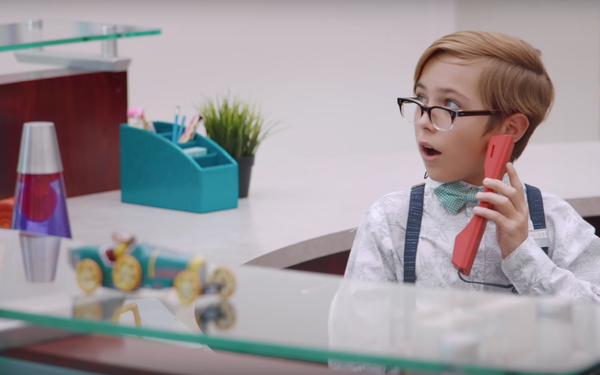 Chrysler officially introduced the brand’s adorable, pint-sized product specialists, the PacifiKids, through a digital and social campaign that featured actress Brooklyn Decker (Netflix’s “Grace and Frankie”) and included this inaugural video on Facebook.

The agencies created a dealer experience around the Pacifica designed to entertain kids while the parents shop. The Pacifikids campaign featured kids taking over a Chrysler dealership and running it for the day, surprising consumers who visited Victorville Motors in California.

It was business as usual at the dealership except that, as 12 families came in to shop for an all-new 2017 Chrysler Pacifica, they were greeted by the PacifiKids instead of the dealership’s adult workforce. With no adults in sight, the PacifiKids — Izzy, Milesand Harper — along with their staff of eight (ages 8 to 13) greeted unsuspecting minivan shoppers and took them through the all-new 2017 Chrysler Pacifica. The reaction of consumers was filmed and is available on Chrysler’s YouTube channel.

In addition to the digital and social campaign, the PacifiKids also made special appearances at family events across the country last summer telling people why the all-new 2017 Chrysler Pacifica is the ultimate family vehicle. Dealer TV spots like this one supported the effort.

Through these efforts and others, Chrysler saw a five-fold increase in online inquiries and stellar sales.