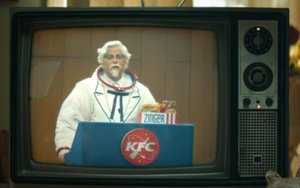 KFC is taking on rival QSRs with its spicy chicken sandwich, the Zinger — and actor Rob Lowe, playing the Colonel, is helping the famed chicken chain promote an epic marketing stunt for the launch.

Following teasers on KFC’s social media channels, the campaign, from Wieden + Kennedy, is kicking off with a 90-second video (below). Lowe — sporting a white, doubled-breasted “spacesuit” — is shown announcing, in a televised press conference to the nation, that KFC is not only launching the sandwich in America; it will launch the sandwich into space.

KFC says that the chicken sandwich space launch is no yolk, and that it will release specifics later this spring.

“I have no idea how we’ll launch a chicken sandwich into space, but the marketing team thinks they can do it,” Kevin Hochman, KFC U.S. president and chief concept officer, claimed in the brand’s tongue-in-cheek release.

The Zinger has been a KFC favorite in other markets for decades and is currently sold in 120 countries, according to the company.

In the U.S., Hochman has said that KFC hopes that the Zinger can challenge other QSRs’ chicken sandwiches, which include McDonald’s’ popular Hot ‘n Spicy McChicken and Burger King’s new Crispy Chicken Sandwich. KFC’s entry will be hand-breaded and fried in-store, as opposed to the refrying frozen, breaded chicken pieces on site, as the other big chains do.

Further, if the Zinger is a hit, it could springboard KFC into being a major player in sandwiches. That’s a mouth-watering prospect for KFC, given sandwiches’ convenience advantage in a world of mobile, snack-on-the-run consumers.

In fact, the company invested $80 million in operational and service improvements to prepare for the Zinger, which will, at least initially, be available for 14 weeks.

The Zinger will be sold on its own for $3.99, or as part of a “$5 Fill Up” meal that includes wedges, a medium drink and a chocolate chip cookie.

Lowe, who says he met Colonel Sanders as a child because his grandfather was the head of the Ohio chapter of the National Restaurant Association, is the latest in a series of actors to play the Colonel since 2015, including Norm Macdonald, Jim Gaffigan, George Hamilton, Vincent Kartheiser and Billy Zane.