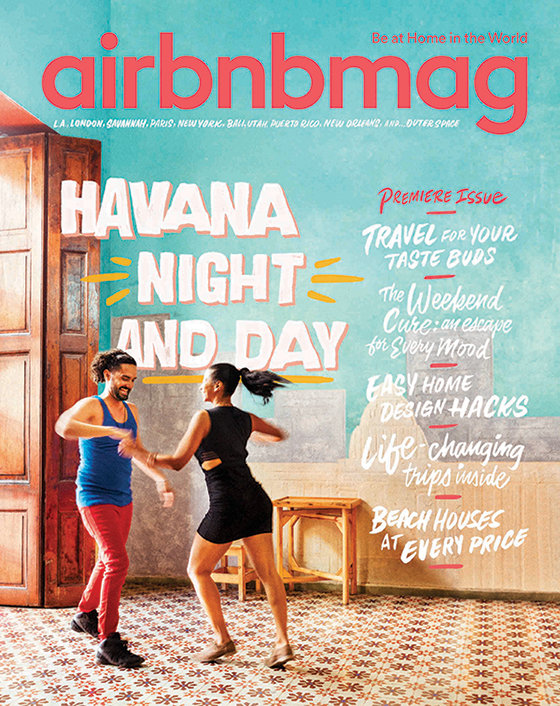 Airbnbmag is part guidebook/part travel magazine; it is targeted to adventurous travelers, rather than luxury-focused editorial common with popular travel publications.

This approach is more likely to attract fans of Airbnb, a company and Web site founded in 2008. It connects people looking for accommodation with hosts that have anything from a couch to crash on to an empty home, as well as a few castles and treehouses.

The aim is for every Airbnb host to have the magazine on their coffee tables. Airbnbmag is also a way for Airbnb to market its new Trips feature, which provides travelers with a range of experiences, tours and activities. The company produces listings in more than 65,000 cities and 191 countries.

The first issue of the print-only publication, kicks off with a guaranteed circulation of 350,000. It includes 45 pages of advertising from destinations, airlines, credit cards, technology and beauty. A second issue is slated for release in September. If the pub clicks with advertisers and readers, it will increase its publishing schedule in 2018.

Priced at $3.99, it will be available at Barnes & Noble locations, supermarkets, mass retail stores, airports and train terminals and newsstands across the U.S. and Canada.

A Hearst spokesperson told Publishers Daily that Airbnb and Hearst Magazines will work side by side on the development, creation and production of the magazine. Both companies have a team of editors, writers, designers and marketers to work on Airbnbmag, overseen by Coles, Michael Clinton, president of marketing and publishing director, and Airbnb’s CEO and head of community Brian Chesky.

Airbnbmag will have four sections: “The Local,” which gives advice on how to eat, play and shop from a local’s perspective; “Stay,” which features Airbnb properties, as well as tips and hacks on how to feel at home while traveling; “Roam,” featuring stories and destinations to inspire readers to plan their next trip; and “Belong,” which spotlights real-life adventures.

The magazine also has a column called “Not Yet Trending,” which profiles a location that has recently spiked in popularity according to Airbnb data, but isn’t yet a mainstream travel destination.

“Airbnb is changing the way we travel, the way we connect, and the way we see the world,” stated Coles. “People want to be adventurers, explorers and locals, not tourists. Airbnb is at the leading edge of travel and Airbnbmag is the future of travel media.”

In 2014, it introduced Pineapple, a publication filled with travel stories and editorial features from hosts and travelers, with a primary focus on London, Seoul and San Francisco, according to travel site Skift. Only one issue of Pineapple made it to print. Some 18,000 copies were distributed to Airbnb hosts; others were available for purchase on newsstands.