Skyy Marks 25th By Saluting Innovators, Including Its Founder 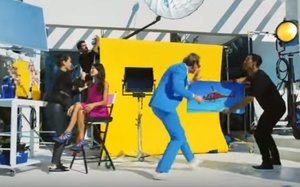 Skyy Vodka is marking its 25th anniversary with a new brand campaign that salutes inspirational innovators by telling their stories in videos and other media.

“Make. Every Day,” from the 5 O’Clock agency, launched with a 60-second video (below), from the director Adam Donald.

Kelly “inspired the campaign’s visual style” and also shot its print, out-of-home and in-store elements. Print and OOH will run in 22 markets. Print media being employed include Wired, Men’s Journal, Nylon, and The Californian Sunday Magazine.

In addition, 15-second spots are running online, including mobile, on Hulu, Kargo, YouTube and Maker Studios, as well as on social channels. The campaign’s social media campaign is being run via @SkyyVodka.

All of the videos can be viewed at www.skyy.com/makeeveryday.

“‘Make. Every Day’ is all about designing the world you want to live in,” said Melanie Batchelor, VP of marketing for Skyy parent Campari America, adding that that is the “visionary spirit” that has been behind the brand since its launch.