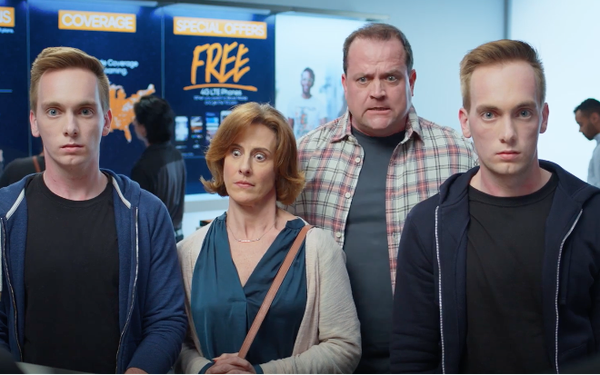 The new effort, from agency Schiefer Chopshop, emphasizes the ease with which one can switch to Boost mobile. In a tactical new spot, a family appears in a Boost store as an angry father complains about the rates his current carrier is charging for data. A sympathetic Boost employee encourages the family to switch, presenting a Boost-branded light switch box. A voiceover explains the current Boost family plan of four lines, with unlimited data, for $100 a month, highlighting that Boost uses Sprint’s network. The spot concludes with the new tagline, “Easy to switch. Easy to save.”

The spot was shot in one of Boost’s new “Next Generation” stores, which have been overhauled to facilitate better staff interaction. The company plans to open more than 1,000 such outlets by the end of the year.

“In conjunction with our expanded distribution plan and Next Generation store design, we felt it was necessary to amplify our story within our above the line campaign” Peiti Feng, Boost Mobile’s brand marketing director, tells Marketing Daily. “Boost continues to build upon its position as the best value in prepaid wireless and passionately empowers its customers to get the most of out their mobile carrier.”

In an effort from last fall, Boost brought back its early-2000s-era “Where you at?” line for the smartphone generation, using notables such as hip hop artist Desiigner, Latin-urban music duo Los Rakas, skateboarder Terry Kennedy and street artist DJ Agana.

This new effort aims to showcase Boost as “more than just pricing and no-contract service plans,” Feng says. “We consciously want to simplify the experience and offer a simple savings solution to the pain points people are facing with today's wireless plans,” she says.

The new campaign will begin appearing in major markets (such as Los Angeles, New York, Dallas and Miami) the week on broadcast and cable networks in both English and Spanish versions. The effort also includes out-of-home and digital advertising.