At Macy's And Kohl's, The Struggle Continues 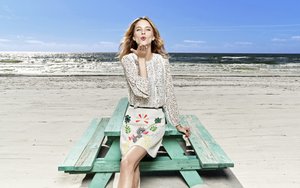 American shoppers are still turning their noses up at mainstream department stores, with both Macy’s and Kohl’s reporting lower sales.

Macy’s numbers, in its first earnings report under new CEO Jeff Gennette, fell short of what analysts had been expecting: Sales in the first quarter dropped 7.5% to $5.33 billion, in part because of store closings. And comparable-store sales fell 5.2%.

Operating income at the Cincinnati-based chain decreased to $220 million, down from $276 million in the same period last year.

The company says it saw strength in its digital sales even as it struggles to stabilize its brick-and-mortar performance, and that it’s pleased with the early results of pilot programs in women’s shoes, fine jewelry, and furniture and mattresses. “We look forward to expanding these successful initiatives nationally this year,” Gennette says in the earnings release, “and anticipate they will have a measurable impact on our performance starting in the second quarter, building through the fall.”

And it reaffirmed its downbeat expectations, anticipating a full-year decline of between 2.2 and 3.3% in its same-store sales.

Calling the results “gloomy,” Neil Saunders, managing director of GlobalData Retail, says the retailer’s “significant deterioration…only adds to the sense that Macy's is on a slippery slope.”

While he praises Macy’s efforts to reinvent and modernize its stores in his report on the earnings call, he writes that progress in addressing core problems — its product and the store environment — has been slow. “Our sense is that Macy's now has a much clearer sense of direction …. However, the distance it needs to travel over the next few years is enormous. We question whether the company is bold, nimble or healthy enough to cover such ground.”

While things aren’t quite as bleak at Kohl’s, they aren’t good, either. Total sales eased 3.2% to $3.84 billion, while comparable store sales fell 2.7%. Net income climbed to $66 million, up from $17 million a year ago. The Menomonee Falls, Wisconsin-based retailer says the income gains came from improved inventory management and other operating efficiencies.

S&P Global, which downgraded Macy’s back in February, doesn’t see things looking up anytime soon for the retail sector, with retailers wrestling with relevance in a world increasingly dominated by Amazon. “Most retail sub-sectors will remain immersed in figuring out how to make e-commerce a success and avoid being potentially marginalized or rendered obsolete,” write analysts Hina Shoeb and  Robert E Schulz in a recent report.

“We expect weaknesses will continue in the department store sector, likely affecting the operating performance of most players including Macy's, Kohl's, and Dillard's. For all three companies, a downgrade could also occur if continuing market share loss and weakening operating metrics cause us to view their competitive standing less favorably.”

1 comment about "At Macy's And Kohl's, The Struggle Continues ".
Check to receive email when comments are posted.
Next story loading