Is The U.S. Hispanic Market A Growth Market?

The Hispanic market has traditionally been defined by most marketers as the growing population of foreign-born immigrants in the U.S. who have emigrated from Spanish-speaking Latin American countries (mainly Mexico, Central America and the Caribbean).

While the market definition has generally expanded during the last 10-15 years to include native-born second- and third-generation Hispanics, the “core” Hispanic market has been characterized by the unacculturated and partially acculturated Latin American immigrants who have represented separate and distinct market opportunities for companies to reach and sell to. The defining characteristic of this market has been the growth and use of Spanish language media and advertising, predominantly consumed by this “core” Spanish-speaking immigrant consumer.

Over the last 30 years, the Hispanic market has exploded, growing from 14.8 million in 1980 to 55 million in 2014, according to Pew Research, but 55% of that growth was driven by immigration in the 1980s and ’90s that exceeded U.S. births. However, around 2004, immigration into the U.S. by Hispanics started a steady decline. In 2016, only 28% of the roughly 1 million annual immigrants into the U.S. were Hispanic. Starting in 2010, Asian immigration started to outpace Hispanic immigration. 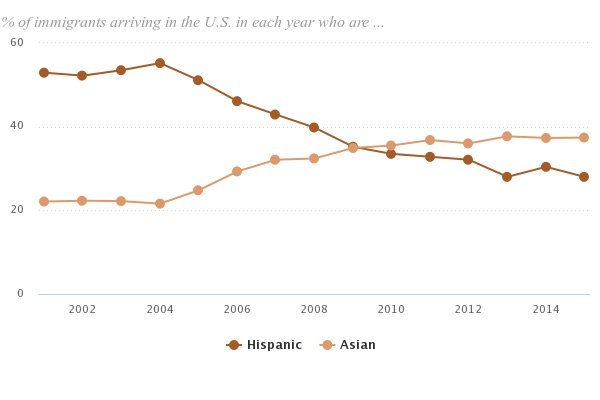 Looking ahead, the percentage of Hispanic immigration is forecast to decrease steadily to 26% and potentially drop down below 25% by 2020, Pew found. This could trend even farther downward considering the current political environment in the United States.

While geopolitical and economic factors may change this trend, the next five years look bleak for “core” Hispanic market population growth in sharp contrast to the go-go ’80s and ’90s when the market grew rapidly.

Overall, the U.S. Hispanic population is forecast to grow, but that growth will come primarily from U.S. births. Which leads to a critical question: Is this U.S.-born Hispanic market a separate and distinct market from the foreign-born immigrant Hispanic market? This question goes to the heart of the future of Hispanic marketing. I would argue that this U.S.-born, acculturated Hispanic is separate and distinct and the strategies and tactics that worked for marketing to immigrant Hispanics the last 30 years will not work for native Hispanics.