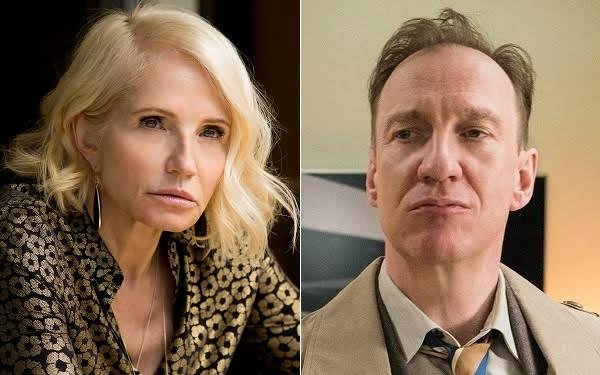 TV’s most conspicuous supervillain at the moment is an oddball Englishman on “Fargo” with bad teeth.

But he’s about to be supplanted by the most villainous supervillain of them all: Mom.

If the writers and producers of TNT’s “Animal Kingdom” have mommy issues, then at least give them credit for trying to work them out in a novel way -- by writing a TV drama about a family of thieves overseen by their crime-boss mama.

As the second season of “Animal Kingdom” gets underway Tuesday night on TNT, the four grown sons of Janine Cody are in open rebellion against their mother. They want a greater say in the heists they pull, and a bigger cut of the loot too. I know -- it’s a common problem in many families.

In a confrontation over these issues between the boys and Mama Janine in the season premiere, one of them even comes out and tells her she’s a b---- (rhymes with “witch”).

Mama (played by Ellen Barkin -- photo above) is more accustomed to being addressed by her boys with the apparently affectionate nickname of “Smurf” -- one of the odder characteristics of their relationship. Every time I hear it, I think the same thing: I wonder what the creators of the Smurfs think of this.

Mama Smurf is nothing if not extremely attached to her family. She is addicted to being the family boss and won’t just sit there and accept her sons’ rebellion and their terms. So Ma Barkin takes up the task of manipulating them back into the nest, starting with cutting off various credit cards to let them know who really holds the purse strings in this family.

The family name of Cody in “Animal Kingdom” brings to mind another Cody from crime-film history -- the ruthless Cody Jarrett played by James Cagney in “White Heat” in 1949. He also had a boss-mom who knew how to manipulate her psychopathic son. What’s the connection? I have no idea.

It would take a psychiatrist to sort out the mother-son relationships in “Animal Kingdom” and their interlocking components of anger, love, hate and financial dependence. The uneducated guess from here is that Ma Cody won’t easily be discarded this season.

Meanwhile, in the cold climes of “Fargo” -- now about halfway through its season on FX -- the mysterious out-of-town criminal named Varga (played by David Thewlis, photo above) has no real psychological hold over the Minnesota businessmen whose parking lot empire he has taken over -- other than fear, that is.

He rolled into town one day spouting weird philosophies about wealth and happiness, and occasionally tells stories related in some vague way to the Cold War. As part of this apparent Cold War analogy the “Fargo” writers appear to be conjuring, Varga happens to have two violent henchmen -- one Russian and the other Asian.

What the Cold War has to do with his shadowy criminal’s takeover of the parking lot company is anybody’s guess at this point. The hold that Varga seems to have over the parking lot king, Emmit Stussy (Ewan McGregor), and his business associate, Sy Feltz (Michael Stuhlbarg), is really based on shock.

They’re shocked at the way this man just seemed to waltz in and take over their lives and, in the process, left them with the impression that they’re helpless.

This is one of the characteristics (of many) of this season of “Fargo” that doesn’t ring true (or possible) to me. Here is this out-of-towner who comes to Minnesota where he is a total fish out of water, and these natives can’t seem to figure out a way to turn this scenario around.

They’re afraid of the henchmen, of course, because these two are willing to do things to other people that the Minnesota businessmen would not. However, maybe the Minnesotans should adopt a different attitude about that.

This season of “Fargo” has been hit or miss, at best. It would greatly improve if Stussy and Feltz suddenly hatched a plan to fight back and rid themselves of these out-of-town nuisances. After all, this is their turf -- not Varga’s.

As for the villainy of Varga vs. Ma Smurf, the TV Blog is not a particular fan of “Animal Kingdom,” but as a criminal mastermind for the modern age, Mrs. Cody is the reigning mother of all TV villains right now.

The second season of “Animal Kingdom” starts Tuesday night (May 30) at 9 Eastern on TNT.