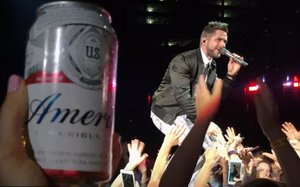 Budweiser’s new TV spot promoting the return of its “America” cans makes use of fan-generated content, as well as an appearance by country music star Thomas Rhett.

Bud has been offering various “patriotic” packaging themes each summer since 2011; this is the second year for the “America” can, which features the word “America” in place of the brand’s name.

Most of the 30-second “This Bud’s for the Dream” spot (below), from Vanyer Media, consists of selfies of fans toasting with  “America” cans during fun summer activities.

The UGC content is “authentic” — the shots were taken by fans and posted spontaneously on their own social media channels when the “America” cans were first introduced last summer, without prompting by a contest or submission process, according to a brand rep. (Influencers did receive a nominal fee for reuse of their previously-posted photos in the TV spot.) Contributing fans’ Twitter handles are superimposed over their content on the screen.

The voiceover messaging announces that “This Bud’s for the dream, and the people bold enough to pursue it…”

Rhett appears at the end of the spot, in concert footage. His  Twitter handle (@thomasrhettakins) also appears on screen.

Budweiser is also marketing the cans and its Rhett tie-ins with online, social media, print, TV and on-premise advertising.

Rhett’s sponsorship deal with Bud began last summer, with a digital content series offering a behind-the-scenes look at his 2016 tour.

This year, the brand — which has made country music a core part of its marketing strategy — will follow Rhett on his nationwide “Home Team Tour.”

Rhett will also make appearances at several country music festivals this summer that will feature the Budweiser Country Club. That program offers festival attendees outdoor bars, games and other activities.