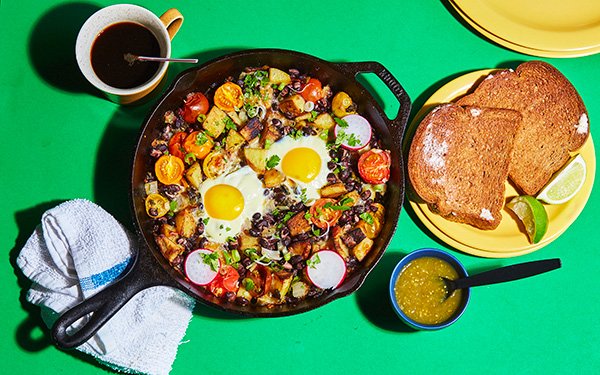 Vice Media is taking on the meal kit world, following in the footsteps of other publishers, like The New York Times, by partnering with online meal kit company Chef'd.

But Vice is offering a specific take on the meal kit business. Viewers can watch an episode from its food and culture vertical Munchies, click a buy button and have all the ingredients and recipes sent to their door. In effect, some of Munchies’ editorial content now comes with a buy button.

Munchies and Chef’d are starting with a line of a la carte meal kits with recipes created by colorful Canadian chef Matty Matheson. Matheson is the host of "Dead Set on Life" on Viceland, the media company's cable TV network. Customers can also watch cooking tutorial videos on how to make the food, featuring Matheson, on the Munchies site.

Munchies currently sells five different meals developed by Matheson, from a pan-fried chicken dinner to trout amandine with green beans. Each kit comes with all the necessary ingredients and recipe instructions, which Vice described in a blog post as “easy-as-hell.”

Customers can also watch cooking tutorial videos featuring Matheson, who also hosts a "How To" cooking series on the Munchies site.

Ransford said he thinks this is the first cooking show that gives viewers the opportunity to order the food featured.

The meals, which are available on Chef'd's site, will set customers back about $20 for a two-person meal or up to $46 for a four-person meal. There is also a $10 delivery charge per order, though meals over $40 get free delivery.

Ransford said Chef'd's job is to give the audience of Munchies’ digital properties and other platforms the opportunity to “not just look at the food and hear about it, but learn how to make it and get it sent to them.”

“We help bring the food experience to life," he added, which helps publishers connect at a deeper level with its audiences.

Munchies decides which recipes to feature, based on what’s trending or most popular, and Chef’d steps in to take on the logistics, including sourcing, packaging and shipping.

Ransford said meal kits are popular due to two main reasons: it is convenient, and economical.

To make a dish after seeing it on a cooking show, audiences have to go online, find the recipe, write down the ingredients, shop for them, come home and make the recipe, perhaps ending up with half a red cabbage or bottle of Marsala wine left to go to waste. Meal kits, on the other hand, deliver perfectly portioned ingredients to consumers' doorsteps.

“Meal kits are convenient and cost less because I am buying just what I need, not buying family sizes. Grocery stores have super-sized everything, and it might be cheaper per ounce but not cheaper,” Ransford said. He added Chef'd's prices are half to a third of what a consumer would actually pay for the ingredients.

Chef’d’s meal kits do not come with a strict subscription plan, unlike some rival companies, which require consumers to pay up front and select three options out of seven every week, Ransford said. Instead, customers can order what they want when they want it, choosing from about 500 options on the site. And most importantly, he noted, consumers can reorder a meal if they liked it.

“That doesn’t exist at any other other meal kit out there,” Ransford claims.

Chef’d has various print and digital media partners, in addition to Munchies and The New York Times, including Good Housekeeping and Men’s Health. Overall, they work with 120 different brands.

Meal kits have skyrocketed. Blue Apron, which has raised nearly $200 million in venture capital funding, filed paperwork to go public earlier this month. It more than doubled its revenues in 2016 to $795 million from a year earlier.

Separately, rumors that Vice Media is going public continue to circulate, but the most recent news is the media company has secured a $450 million private-equity investment from TPG. It is now reportedly valued at $5.7 billion.