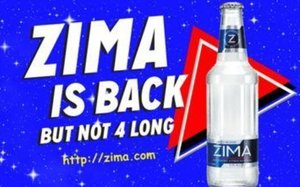 Counting on the current nostalgia for a decade that ended just 17 years ago, MillerCoors is resurrecting Zima for a limited run this summer.

The clear, citrus-flavored malt liquor drink, which quickly became kitschy even during its heyday in the mid- to late-’90s, lost steam within a few years and was finally discontinued in the U.S. in 2008 (although it continues to be popular in Japan).

This time around, Zima’s being promoted via some Millennial-friendly channels that weren’t around in the ’90s.

For instance, the campaign is using a Facebook Messenger chatbot to offer info on Zima and ’90s pop culture entertainment activities.

On the PR front, through Olson Engage, there’s a partnership with social media influencer Fuck Jerry, and a seeding campaign to classic '90s faces including Jennie Garth, Mario Lopez and Third Eye Blind.

There’s also a dedicated Zima Web site (above) featuring gimmicks considered da bomb back in the Net’s early days in the ’90s, including neon wingding arrows, forced background audio, and over-use of the Comic Sans typeface.

"The ’90s have become the quintessential decade for nostalgia, so it's time for the return of our ’90s icon," Zima’s senior marketing manager, Tristan Meline, summed up in a blog post, adding that the consumer feedback and buzz have been “incredible.”

There’s been no hint that MillerCoors might decide to bring Zima back for a longer run if the sales are impressive enough. Still, the brewer, along with its competitors, keep offering new twists to keep young adults (Gen X, as well as Gen Y) interested in the increasingly crowded flavored malt beverages category.