No Place To Hide When Terror Comes To A Tiny House 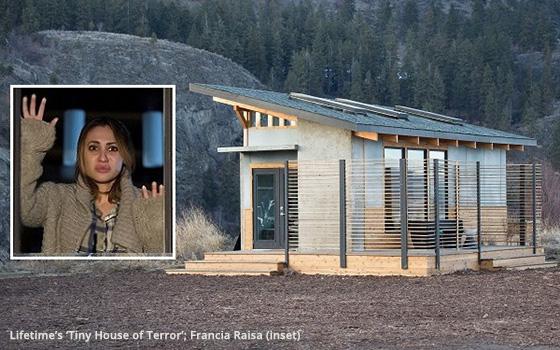 The people who make the women-in-peril movies at Lifetime are nothing if not responsive to current social trends.

So it was probably inevitable that they would set one of their made-for-TV movies in a tiny house -- the very epitome of coziness, safety and worry-free living.

That is how advocates of the tiny-house lifestyle would describe their choice of domicile, which is usually a structure encompassing 300 square feet or less.

They have become a craze on TV, if not in real life, with numerous tiny-house shows on HGTV and other channels. I first wrote about them last year here.

In the new movie titled “Tiny House of Terror” premiering this weekend on Lifetime Movie Network, a tiny house is anything but a safe space.

Located all by itself in a semi-wilderness ominously known as Gravity Hill, this tiny house demonstrates that there’s no place to hide when someone attacks the house with a heavy piece of construction equipment.

That’s the house in the photo above, with Francia Raisa, who plays the woman-in-peril in this tiny house. She’s the wife of a young tech genius who went missing on a hiking trip and is now presumed dead.

So she has moved, at least temporarily, to this tiny house he built as part of a planned development of tiny houses that would be designed to complement their natural setting.

In the wake of his presumed death, various local factions have begun fighting over the future of this development. The conflict threatens to disrupt this woman’s attempts to find the solace she seeks.

Among other pitfalls of this tiny house’s location, the area was named Gravity Hill because of a mysterious magnetic field that is capable of wreaking havoc on high technology such as cell phones and home-security systems.

If you’re thinking of moving there, be ready to duck because the magnetic field sometimes makes kitchen knives suddenly fly through the air. And since this house is tiny, that means very near misses when the cutlery takes off.

“Tiny House of Terror” begins promisingly as an indictment of our technological age. In the manner of HAL from “2001: A Space Odyssey,” systems that control high-tech homes and cars run amok, resisting their owners’ ability to turn them off. The missing tech mogul is said to be the inventor of one such system, called “Host.”

But the dangers and disadvantages of living in a tiny house would not seem to be limited to technological failings, and this is where “Tiny House of Terror” falls short.

The movie fails to convey the claustrophobia that must result, at least for some, from living in a tiny house. Nor does the lack of closet space seem to be an issue for this young woman. Plus, someone has infested the house with spiders, although that could happen in a house of any size.

As for the identity of the source of all this tiny-house terror, this person does not get revealed until close to the movie’s end. There are plenty of candidates, however, particularly in the community of local people this terrorized young woman meets in the vicinity of Gravity Hill.

After watching this TV movie, here is some advice for those seeking peace and tranquility in a tiny house: Don’t go in.