With Russia Trip, Colbert Shows Why He Has Edge Over Fallon 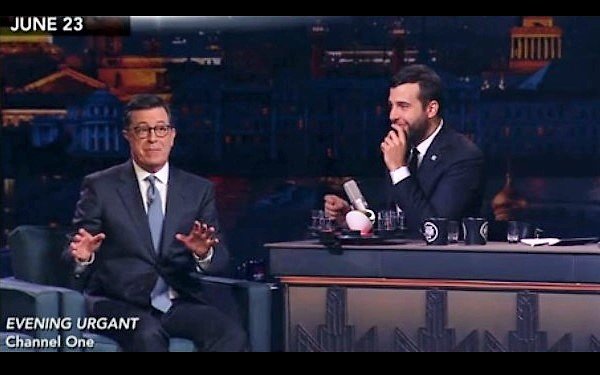 It is often said of comedy that timing is everything, but that’s also true in a number of other pursuits, including journalism.

In the news business, making the best decisions on how to play stories requires an instinct for knowing what’s important or timely or of the greatest possible interest to the greatest number of people.

When producing a topical late-night show, the same skill set applies. There is really no hotter topic in the news these days than the subject of Russia, other than healthcare legislation, which doesn’t exactly lend itself to comedy.

So what did Stephen Colbert do? He went to Russia last week to tape bits and segments which will air soon on his CBS “Late Show.” Back in the Ed Sullivan Theater on Monday, Colbert announced that this was what he had done on his week off, talked a little bit about the trip and provided a brief peek into what he did there.

He showed a short clip in which he appeared on a Russian late-night show apparently called “Evening Urgant,” hosted by Ivan Urgant (seen with Colbert in the screen-grab above).

With his beard, Urgant reminded me of Jimmy Kimmel and even Jimmy Fallon, who seemed to have the semblance of a beard the last time I grazed past “The Tonight Show” recently. Colbert joked Monday night that “Ivan” must be Russian for “Jimmy.”

On the “Urgant” show, Colbert announced he was considering a run for the U.S. presidency. His Russian host’s reaction could not be determined, since that was where Colbert cut off the video Monday night.

So Colbert goes to Russia, announces it on his show when he returns, shows a clip or two and makes a lot of jokes about it. Most importantly, he made headlines. One reason why this subject emerged as the topic for today’s TV Blog is because I couldn’t miss the many stories about Colbert’s trip that I saw all over the place on Tuesday morning. Message received.

What’s Fallon up to? I really have no idea. Note the use of the phrase “grazed past” in one of the paragraphs above, in which I described spying Fallon recently with a few days of unshaven growth on his face.

“Grazed past” is the operative phrase when considering the Fallon “Tonight Show” these days. It is what many people do. When I say “grazed past,” what I’m really saying is that I check into the Fallon show, glance at what he’s up to for a moment and then move on.

Every time I do this, Jimmy is jumping around frantically like a kindergartner on a sugar high. I think the last time I saw him, he was engaged in a manic game of charades with his guests, who probably wanted more than anything to be elsewhere.

Here’s a theory I came up with today about the problem with the Fallon “Tonight Show”: It’s off brand. In other words, it became the Fallon show rather than “The Tonight Show” merely hosted by Jimmy Fallon.

The template for the “Tonight Show” brand was established long ago by Johnny Carson. Jay Leno understood this. He often said that it was “The Tonight Show” itself that was more important than the person who hosted it. So Jay gave people what they had long come to expect from it.

Sure, he and Carson were not the same. But in many ways, the show was the same throughout the Leno years. Now it’s nothing like what anyone remembers “The Tonight Show” to really be -- other than in name only.

Meanwhile, at CBS, Colbert is carving out his own niche in late-night TV. He’s not Letterman, of course, but the CBS “Late Show” is not a brand-name like “The Tonight Show.”

Oh, well. Maybe someday NBC will restore “The Tonight Show” to what made it America’s No. 1 late-night show for more than 40 years, before it’s too late to fix it.

news, tv
4 comments about "With Russia Trip, Colbert Shows Why He Has Edge Over Fallon".
Check to receive email when comments are posted.
Read more comments >
Next story loading