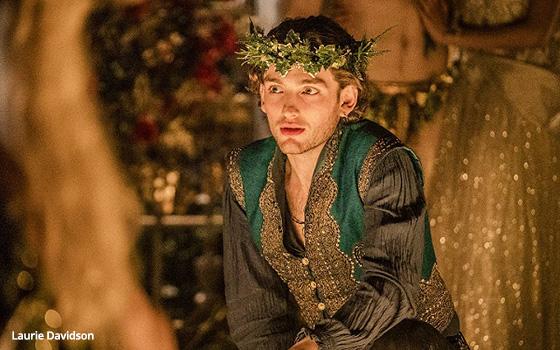 Devotees of William Shakespeare should not expect to learn anything about the bard’s life as a young adult in the new TNT drama series called “Will” premiering Monday night.

The show is pure fantasy, depicting a London in the 1580s that is populated by punk-rock youth of the late ’70s.

It’s the show’s overriding gimmick: Depict the world of the young Will Shakespeare in ways its target audience will hopefully understand and relate to. Among other things, this means dispensing with nettlesome elements like truth and facts.

The show even lays on music from the punk- and post-punk eras, including “London Calling” (the Clash, 1979), “That’s Entertainment” (The Jam, 1980) and a song that is probably titled “Really Gonna Punch You Out” by an Australian punk band called The Chosen Few. (The origins of this last song, such as a release date, were a little hard to pin down in an online search.)

“London Calling” is heard as the young Will (played by Laurie Davidson, pictured above) strolls through the muddy, crooked, chaotic paths and alleyways of London for the first time. “That’s Entertainment” is played when he beholds a piece of London theater entertainment for the first time. And “Really Gonna Punch You Out” plays over the scene of a tumultuous melee.

The participants in this donnybrook are festooned in a variety of leathers and feathers, and adorned with elaborate makeup. They have partially shaved heads, some with Mohawks.

With coverage of the G20 Summit meeting still fresh in our minds, the rowdy residents of TNT’s 16th-century London look for all the world like the gutter-punks who flocked to Hamburg to protest the meetings of world leaders. Anarchy in the U.K. indeed.

With the preponderance of its cast of actors and actresses decidedly under 30 years of age, “Will” plays like one of those “historical” series the CW might put together -- like the recent one called “Reign” about Mary Queen of Scots -- or even the recent “Victoria” on PBS’s “Masterpiece” about the early years in the reign of Britain’s Queen Victoria.

There’s little difference between “Will” and these series, other than the liberal use of the four-letter s-word that was once verboten on advertiser-supported TV, but has become OK for use on basic cable in recent years.

The Turner networks in particular seem to revel in the use of the s-word as it gets bandied about with peculiar pleasure on edgy TNT dramas like “Animal Kingdom” and “Claws,” as well as “Conan” on TBS.

On “Will,” the liberal use of the word makes you wonder if it was really in such wide use in Elizabethan London.

It’s highly likely that the writers and producers of “Will” simply took creative license in its use, since most of this show plays as if historical accuracy was the last thing on their minds.

“Will” also dips a toe or two into 21st-century issues. A young woman character, for example, is meant to embody all the inequality fervor that the current generation is so obsessed with -- both real and imagined.

That's another way Will” has been designed to appeal to younger viewers. Never mind that the music it uses and the punk era it evokes are both decidedly before the time of its Millennial target.

The point of the show (if this has not been obvious already) is to imagine the young Shakespeare’s earliest years in London as a “provincial” from Stratford-Upon-Avon in Warwickshire who has come to the big city with a dream of becoming a famous playwright.

Once there, he encounters all sorts of obstacles, including an entrenched theater community that doesn’t understand his highfalutin’ ideas.

Will the young Will triumph in the end? Since we already know the answer to that, the only thing to remain interested in is the “struggle” for his inevitable success.

Whether or not these struggles prove interesting enough to sustain this show is a question for which I have no answer.

While watching the first two episodes of “Will,” I kept returning to the same thought: If they had called him Bill Shakespeare instead of Will, his initials would then have been BS -- which, when all is said and done, is how I would best describe this show.