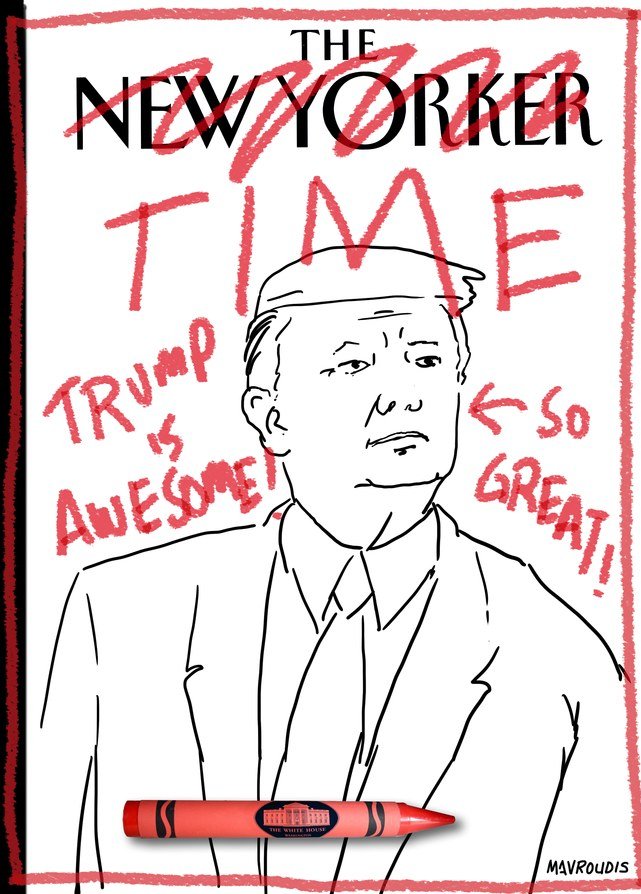 Today’s “Daily Cartoon” from The New Yorker nails one of the more fringe, but much-tweeted media stories of the week concerning President Donald J. Trump: the discovery of fake versions of Time magazine featuring Trump that were framed and hung in several Trump resorts.

“It looks like the cover of Time magazine and the big photo on the cover is Donald Trump and it says, “Donald Trump, The ‘Apprentice’ is a television smash! And then there’s another headline above the masthead that says, ‘Trump is hitting on all fronts, including TV! This is hung up. Hung on the wall, very impressive looking. It’s fake, it’s totally fake,” says the Washington Post’s David A. Fahrenthold in a breakdown of the fake Time magazine cover story (watch below).

“Donald Trump, who spent the whole campaign railing against fake news, literally has fake news hanging on his walls,” Fahrenthold continues, speculating on who created and hung the phony magazine covers and why.

But the answer could be with Trump himself, who already alluded to harboring untruthful fantasies about Time magazine cover play during his first public speech following his inauguration.

During the infamous speech at CIA headquarters, in which Trump officially declared “war” with the media, asserting they were “fake news,” Trump began waxing falsely about setting a record for Time magazine covers.

“I have been on their cover like 14 or 15 times. I think we have the all-time record in the history of Time magazine,” he boasted. “If Tom Brady is on the cover it’s one time because he won the Super Bowl or something. I’ve been on the cover 15 times this year. I don’t think that’s a record that can ever be broken.”