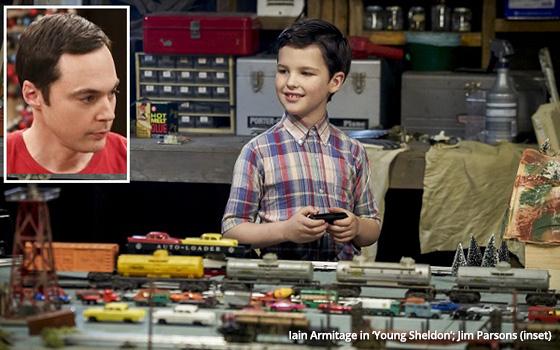 Of all the fall pilots the networks have provided for preview, the “Big Bang Theory” spinoff called “Young Sheldon” is the one that fires a TV columnist’s imagination the most.

A spinoff based on the childhood of perhaps the most popular character now on TV? That sounds like a no-brainer. Or is it?

They have been tried before, of course. “Frasier” is perhaps the most distinguished success of the spinoffs in TV history that were based on a standout character from another show.

Readers who are well-versed in TV trivia or have been around a while will find plenty of unsuccessful examples to cite too. “Beverly Hills Buntz,” anyone?

I can’t recall other spinoffs in the same vein as “Young Sheldon” that centered on a character at a different age, but I am sure some of the aforementioned “experts” will clue me in on that.

I do know a little bit about “Young Sheldon,” however, because I just watched the pilot.

So unless this pilot episode changes or is otherwise altered before it premieres on CBS in September, you will see a sitcom that differs markedly from “The Big Bang Theory.”

For one thing, “Young Sheldon” is not a traditional “three-camera” sitcom in the manner of “Big Bang” -- or at the very least, it does not look like it. The pilot had no laugh track either, which means you’re on your own in determining what’s funny and what’s not.

One of the challenges for a show like this is to make sure there are no slip-ups where the central character’s known family history is concerned.

Young Sheldon is played by Iain Armitage (photo above). Present-day Sheldon Jim Parsons (inset) provides narration that is a cross between “The Wonder Years” and “Forrest Gump.”

As the show opens, young Sheldon is preparing for his first day in high school — the result, apparently, of this young genius’ accelerated progress through elementary and middle school.

Sheldon’s older brother George Jr. is complaining because nine-year-old Sheldon will be in the same grade that he’s in.

Sheldon’s twin sister, Missy, on the other hand, is rejoicing that he’ll no longer be in her class.

Like the present-day Sheldon, young Sheldon has the same propensity for tactlessly saying anything that comes into his mind, no matter how insulting it is to others.

Dad George Sr. is a coach on the high school football team. Mary seems to be a stay-at-home mom -- at least in the pilot.

Long-time fans of “The Big Bang Theory” are already familiar with members of Sheldon Cooper’s family.

The recurring role of his mother is played by Laurie Metcalf in “The Big Bang Theory.” Zoe Perry (Metcalf's real-life daughter) plays a younger version of his mother in “Young Sheldon.”

Sister Missy has also been seen in “Big Bang,” played as an adult by Courtney Henggeler. Brother Georgie has been mentioned on “The Big Bang Theory,” but has never been seen in the show’s entire 10-season history.

Father George Sr. -- played by Lance Barber -- is not likely to turn up on “The Big Bang Theory.” As has been mentioned on “Big Bang,” Sheldon’s father has been deceased since some time in the 1990s. The exact decade of “Young Sheldon” is a little hard to peg from the pilot, but let’s just say it’s 20-plus years ago.

That leaves a question hanging in the air about “Young Sheldon” and how George Sr.’s death might someday have to be dealt with.

But that’s presuming a level of success for “Young Sheldon” that is by no means certain. The show’s singular advantage is that it will ride into prime time on the coattails of “The Big Bang Theory,” which is a billion-dollar juggernaut of a TV series.

But “Young Sheldon” is so different in style from “Big Bang” that the mother ship’s coattails might only go so far in ensuring an audience for the show.

In the pilot, there's no sign that young Sheldon is due to meet any of the young versions of his friends-to-be from “The Big Bang Theory” anytime soon.

However, it doesn’t take a genius to surmise that introducing younger versions of the other beloved characters of “The Big Bang Theory” will be hard to resist.