Phelps Vs. Shark Race Was More Come-On Than Competition 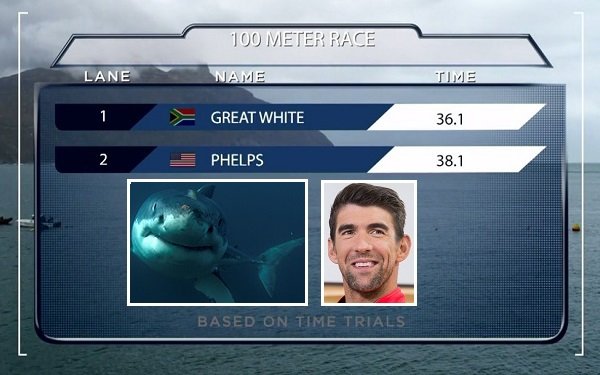 We all should have realized from the outset that an actual one-on-one race between a great white shark and Olympic swimming star Michael Phelps was not really going to be possible to arrange.

And yet, many of us expected it anyway, even if an examination of at least some of Discovery Channel's publicity efforts reveals that the network never actually claimed that Phelps and a shark would somehow stage a side-by-side swimming race -- like in a pool with lanes.

The publicity merely made it seem that way. As a result, you could be forgiven for thinking that an actual race was what you would see if you tuned in on Sunday night.

Instead, what viewers saw was a one-hour show that essentially compared the swimming speeds of Phelps and various species of sharks.

At least the show made this clear from the outset. Just a few minutes into the show, the nature of this “race” -- that it was not really going to be a race in the usual sense -- was stated outright. If you then wished to continue watching the show, then that was up to you.

The hour then consisted of Phelps (photo above) and a group of researchers observing various species of sharks and measuring their swimming speeds.

The measurements, and the ability to make them in the first place, were positioned as ground-breaking, since -- according to the show -- such measurements had never been made before.

Part of the show then had Phelps being prepped for a swim speed test of his own in which he was outfitted with, among other things, shark-like flippers where his feet should be.

In the end, Phelps came up short, and some viewers felt they had been short-changed. On Monday morning, various stories appeared on-line with headlines ballyhooing a load of negative Twitter reactions to the Man Vs. Shark Non-Race of the Century. But the actual number of complaining tweets the stories cited seemed paltry indeed.

For the record, Phelps’ Great White Shark adversary beat the human Olympian. That result was not entirely unexpected if you stopped and thought about it.

But that's the thing: Few of us did stop and think about it, which is why so many of us thought that Phelps and a shark would be racing in a conventional pool with lanes, even if it should have been obvious that that would be impossible.

On the other hand, who knows? Maybe a pool could have been equipped with a lane-length cage for the shark to swim in while Phelps swam in the adjacent lane. Oh, well, maybe next time.

The Phelps vs. Shark gimmick helped Discovery kick off its annual week of shark shows known as “Shark Week.”

As gimmicks go, it wasn't as bad as, say, the special that Discovery aired in December 2014 in which the network made it seem as if a naturalist would be swallowed whole by a giant anaconda. That swallowing did not happen, which disappointed many people.

There again, however, if we had only bothered to stop and think about it, the prospect of a scientist volunteering to be swallowed whole by a giant snake for a TV show was ludicrous.

It would have been suicidal, in fact, because the swallowed scientist would almost certainly have been killed.

Perhaps it is true, as P.T. Barnum is supposed to have said (although there is no evidence that he did), that there is a sucker born every minute.