Who You Gonna Call? Rob Lowe And Sons Hunt For Ghosts On A&E 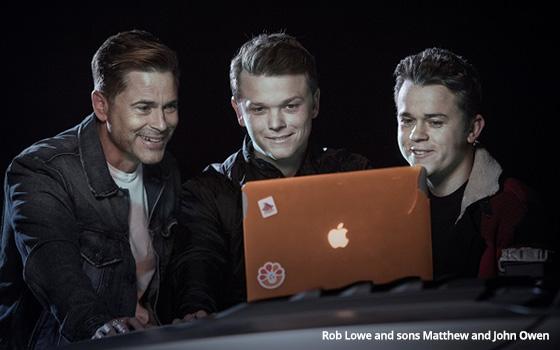 One of the problems with TV’s ghost-hunting reality shows is the apparent shortage of supposedly haunted locations that are available to TV producers and their crews.

As a result, a seemingly small group of old buildings and landmarked historic sites turn up again and again on multiple paranormal shows. That happens to be the case with next week's premiere of a new ghost show featuring Rob Lowe and his two sons.

The show, titled “The Lowe Files,” premieres next Wednesday night (August 2) on A&E.

In the inaugural episode A&E provided for preview, Lowe and sons Matthew and John Owen join a shaman (identified as “Shaman Jon”) for a night-vision tour of an imposing 19th-century building located in Ione, California, that is known today as Preston Castle.

For more than 60 years, starting in 1894, the building was a correctional center for juvenile lawbreakers (boys). It’s the kind of place that used to be known as a reform school.

Aspects of its history are terribly tragic, according to the “Lowe” show and various online sources.

A housekeeper was supposedly murdered there, a girl was killed when she fell into a well, and various boys who were housed there met their deaths in any number of ways. Suffice it to say, it was a tough place.

It is now a local architectural landmark that is open for tours and special themed events such as a “haunted house” they set up in October around Halloween.

An online search also reveals that at least two other paranormal shows have already been there -- Travel Channel's “Ghost Adventures” and Syfy's “Ghost Hunters.”

This phenomenon occurs again and again whenever a new paranormal show comes along and I go in search of information about the site featured in the premiere.

The inevitable Google search always turns up information about the other shows that have visited previously. The sites include old, unused prisons, historic mansions and institutions, and a former southern plantation or two where slaves once lived and worked (and now are said to haunt the place).

These are historic sites that depend on paying visitors for their survival. Therefore, they seem to be very hospitable to TV producers when they come around seeking to film TV shows there.

Not that there is anything wrong with that. These paranormal shows presumably have an eager audience -- or at least one big enough to justify the many such ghost shows that have turned up on various cable channels over the last few years.

As a person not particularly interested in this area of study, I tend to be dismissive of these shows and their gimmicks. These include the various “tools” of the ghost-hunting trade.

In “The Lowe Files,” small portable lights are set up that supposedly go on only when there is a spirit present in a room. Not unsurprisingly, they do just that during the premiere episode of the show.

There are also various recording devices on all of these shows that supposedly record ghostly voices and then translate them into English. On one show I reviewed last year -- “Ghost Brothers” on Destination America -- they even used a smart phone app to capture the “voices” of spirits.

The thing that makes me most skeptical about all of these shows is that there is almost always a sign that the paranormal beings they are hunting for are, in fact, present.

It is as if they don't dare produce an episode in which ghosts do not seem to appear because then, the thinking goes, the show would be pointless and not very entertaining.

Besides the ghost lights on “The Lowe Files,” the “evidence” that spirits are present include the sight of a child's inflatable ball actually moving an inch or two on the floor without any of the Lowes apparently touching it.

However, as we all know, anything can be done today with video and audio. That would seem to render the ghost shows unbelievable – even one as reasonably likable as “The Lowe Files.”