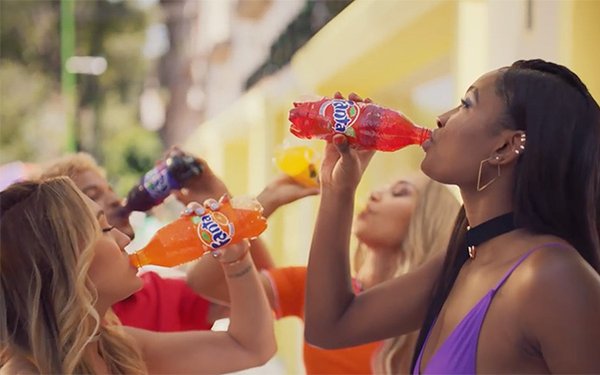 Coca-Cola’s Fanta brand is poised to release a new television commercial, “Be More Than One Flavor,” next month in which “The Fantanas” hits the city streets with summer dance movements.

The brand is enlisting youthful stars of stage, screen and social media to be the faces of Fanta Orange, Fanta Strawberry, Fanta Grape, Fanta Pineapple and Fanta Orange Zero.

The lineup includes Eva Gutowski, a blogger and author known as MyLifeAsEva; Lauren Riihimaki, a content creator known for her DIY videos on YouTube; Jordan Fisher, an on-stage and -screen singer, dancer, songwriter and actor, and Coco Jones, a singer, actress and songwriter.

Choreographed by Fatima Robinson, the commercial includes other people who join in on the excitement and try new flavors. The campaign, developed in partnership with Fitzco//McCann, directed by Greg Brunkalla and photographed by Gary Salter, will come to life through national television commercials, cinema advertising, online video, social media, streaming radio and out-of-home in the months to come.

With the new Fanta campaign also comes a remix of itsanthem, “Wanta Fanta.” Producer Mike WiLL Made-It hit the studio to bring a variety of musical genres and styles into a new track that embodies the spontaneity of Fanta and its slogan.

For 2016, Beverage Digest ranked Fanta as the fastest-growing brand among the largest sparkling brands in the United States.