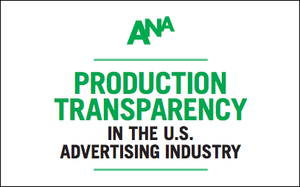 The Association of National Advertisers has just released its highly anticipated report on commercial production practices today, concluding that marketers need to do a far better job of stewardship over the production process for their ads.

That’s because some agencies — the report pointedly stresses not all — engage in what the ANA termed “non-transparent” production practices.

One such practice has been a burr in the saddle of independent production houses for years — where agencies reach out to such entities and effectively demand a pricey estimate for a project that the agency’s in-house production unit can undercut and thereby get the job from the client. Indie houses go along because they feel pressure to do so, given their dependence (to one degree or another) on the agency community for work.

That’s often called bid rigging, depending on the particular circumstances of a given case. The U.S. Department of Justice launched an investigation late last year — separate from the ANA probe — looking into commercial production practices that run afoul of laws and regulations. The DOJ query is ongoing. The Department has subpoenaed entities at five agency holding companies including WPP, Omnicom, Publicis, Interpublic and MDC Partners.

The latest ANA report relied partly on research from K-2 Intelligence (whose records have also been subpoenaed by the DOJ) -- specifically work that the research firm did for the ANA on a separate transparency report delving into the media ecosystem that was released last year. That report omitted the firm’s findings on commercial production practices, but those findings were included in the just-released report.

According to sources interviewed by K2, some creative agencies are “increasingly directing post-production projects to affiliated companies within the same agency holding companies.” Per the report: “Sources told K2 of a bidding process that suggested agency self-dealing. Specifically, six producers/editors from four separate, independent post-production companies reported firsthand accounts of agency producers asking them to submit a so-called 'check bid' on a project that was pre-determined by the agency to go in-house.”

In those accounts, the post-production companies were “urged to inflate the price they would otherwise quote on a bid. Ostensibly, this enabled the agency producer to create a paper trail that justified to the advertiser its decision to award the project to an in-house facility, which provided a rival bid at a lower price.”

Among the report’s conclusions:

The Use of agency in-house production resources is not always transparent to the shop’s advertiser clients.

Bidding systems for production jobs controlled by a client’s agency are “sometimes dysfunctional and conflicted” especially if the agency’s in-house production unit is bidding for the work.

Such bidding processes can lead to “costly, efficient and suboptimal advertiser business decisions.”

ANA CEO Bob Liodice commented that the report “demonstrates that transparency continues to be a fundamental issue throughout our ecosystem.” But to his and the organization’s credit, Liodice stressed that marketers have to step up, get in the weeds and improve their “supervision and understanding of the production ecosystem.” Stringent oversight, Liodice suggested, will lead to optimal business decisions in the commercial production sphere.

The ANA acknowledged that oversight of the production sector is weak at many companies. A related survey found that fewer than half of respondents require their agency to disclose if they are bidding a production job to an in-house or affiliated production company. And more than 60% of respondents replied that they do not require or don’t know whether their agency contract requires production rebates and other incentives to be passed back to their company.

Among the report’s recommendations:

Advertisers should require agency disclosure when an in-house production or music resource is being considered for a project. In the event of a bid where in-house facilities are part of the process, have all bids sent to a third party or client staff person first.

Be aware of state-by-state commercial production incentives and rebates. 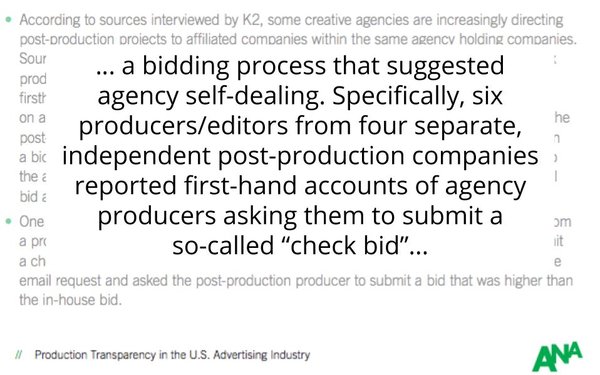