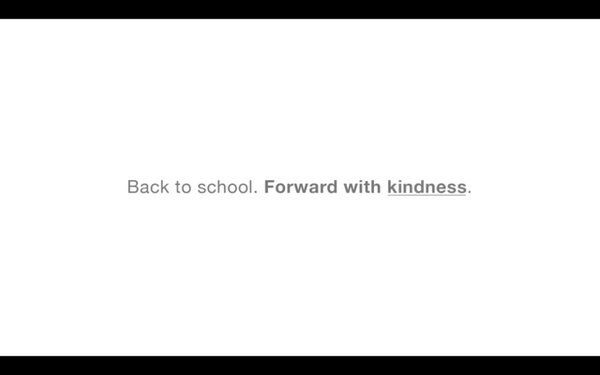 To reach parents closing in on the back-to-school shopping mission, both Gap Kids and Kids Foot Locker are using ad campaigns that try to inspire character and generosity. And the ads are breaking just as shoppers are getting ready for the final—and largest—wave of spending, according to new research from Brand Keys.

Gap Kids ads are themed “Forward with,” and include four short films highlighting valuable success skills. In partnership with the upcoming release of Wonder, the story of Auggie Pullman, a boy born with facial differences, one spot (below) is called “Forward with Kindness.” Highlighting the ways Pullman helps a community learn about kindness, it includes a social media campaign with the #ChooseKind hashtag.

Part of the campaign includes a “Wonder Certified Kind Classroom” initiative, which teaches third-through-sixth graders about kindness, acceptance and inclusion, as well as a national #ChooseKind t-shirt design contest. Eight winners will be selected and sold nationally.

The company says the idea behind the campaign is that traits and behaviors that lead to success matter more than what kids wear, with three additional short films that focus on those “who take the time every day to dress kids with courage, kindness and possibility.” Other spots include “Forward with Confidence,” which features a third-grade teacher who teaches kids mantras for positivity; “Forward with Focus,” which highlights a meditation mentor and “Forward with Creativity,” highlighting the work of an art teacher.

Creativity is also the spark behind the new Kids Foot Locker campaign, which stars six different families and their love for sneaker culture. Called “Generations,” the six-film series kicks off with dancer and choreographer Teyana Taylor, highlighting her back story, her love of dance, her passion for sneakers—and her commitment to working with young dancers.

Created by MOFILM, the retailer says it plans to release one new video per week.

Both campaigns are rolling out as parents move into their second wave of back-to-school spending, according to new research from Brand Keys.

The New York-based consumer loyalty research firm reports that on the first round of shopping this summer, parents typically spent about 41% of their back-to-school budget, concentrating on such supplies as notebooks, writing implements, printer cartridges, computers and other electronics. The next wave, which takes up about 59% of the family BTS budget, is when they intend to zero in on clothing and shoes.

This year, Brand Keys expects parents will spend a total of $716 per household with school-aged children, up 6% from last year.

For both waves of spending, it finds that Amazon is the default shopping platform.