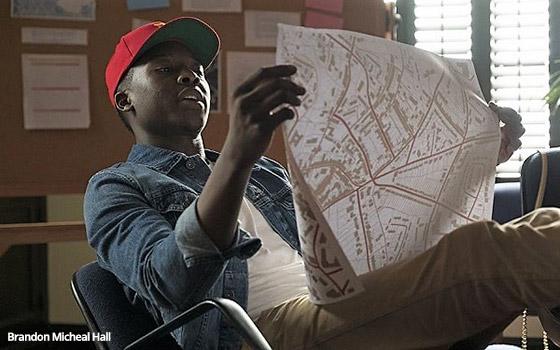 The pilot for the new ABC comedy called “The Mayor” shows promise, but an anti-Semitic remark early in the half-hour episode strikes a sour note.

It comes in the midst of a conversation between a young aspiring rapper named Courtney Rose (played by Brandon Micheal Hall, pictured above) and his mother Dina (Yvette Nicole Brown).

Courtney is the show’s central character. He’s the mayor of the show’s title -- a young man who hatches a plan to run for mayor of the small (fictional) California city where he lives to raise his profile and promote his music. But in the pilot, he actually wins the election. Going forward, the show presumably will be about what happens next.

But this conversation between Courtney and his mother takes place before Election Day, when he is explaining to her why he registered as a candidate for mayor in the first place.

So she says to him, “You want to get discovered? Just do it the old-fashioned way … by waiting for a nice old Jewish man to give you his business card!”

OK, there it is -- the same old, same old. You want to get ahead in the entertainment business? You have to wait for a Jew to open the gate for you because Jews control the purse strings and they control the media.

Of course they do. Everybody knows that, right? Jews are the ones who always have the money, and they use it to control the fates of everybody else.

All of the above is implied in the “joke” uttered by Yvette Nicole Brown in the pilot episode of “The Mayor.”

The line is even written and delivered in the manner of an assumption. It is assumed that everyone who hears it will know exactly what she means. It casually perpetuates a stereotype about Jews that is practically as old as Judaism itself.

When I come across lines like this while previewing TV shows, I sometimes wonder how on earth they make it through the editing process.

The sobering conclusion I sometimes reach is that the people who create and then deliver lines like this have no clue how insulting and hurtful they can be. It is the very definition of insensitivity.

News flash: We live in sensitive times. No person watching a TV show at home should have to hear a slur like this against the group they belong to or identify with.

This particular slur didn’t stop me from watching the “Mayor” pilot all the way to the end. I even found it to be a very likable show, starting with the show’s star, Micheal Brandon Hall.

And yet, the Jews-and-their-money slur stuck in my brain like an earworm. At the very least, it presented a needless distraction and a kernel of doubt about this show and whether I should support it.

Yes, the line might be considered by some to be a throwaway line. Well, maybe it should be thrown away. Series pilots often undergo changes before a series’ premiere date. This ought to be one of those times.