Not THAT Wall. In New Campaign, North Face Says, 'Climb On' 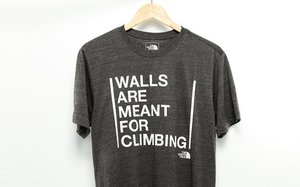 Wall is a simple noun that’s taken on a fiercely divisive meaning in the last year. The North Face’s new campaign is hoping to rise above all that: The new "Walls Are Meant For Climbing" campaign is offering a free day of climbing in participating gyms, hoping to help the sport shed its elitist image.

The effort, which kicks off with a “National Climbing Day” scheduled for Aug. 19, also includes a $1 million donation to the Trust for Public Land, focusing on creating public climbing walls in underserved communities. And for every person who takes advantage of the freebie, the company says it intends to give $5 (up to $50,000) to Paradox Sports, a group that helps people with physical disabilities experience climbing.

Rock-climbing, which is growing in popularity among urban Millennials who are flocking to climbing gyms, is still a small niche activity. The new push is meant to start people talking “about building trust and community around–and beyond– climbing walls,” the company says, in its announcement. “Walls aren't meant to divide us, they unite us. Walls are meant for climbing.”

Plenty of people disagree. While the latest polling shows that most Americans dislike President Trump’s plan to build a wall to further divide Mexico from the U.S., it still has considerable support. A recent Washington Post/ABC News poll, for example, finds that 67% of voters oppose the wall, while 37% are all for it.

The North Face, based in Alameda, Calif., but owned by VF Corp., says the effort is bigger than that single issue. “‘Walls Are Meant for Climbing’ is a global campaign, with activations in Europe, China, Mexico and Canada,” a spokesperson tells Marketing Daily. “Our aim is to encourage people to think more hopefully about the community we can build– as climbers, as outdoor enthusiasts, as believers in the good of humanity, not to take on any government body or individual.”

Sid Lee in L.A., the North Face’s agency of record, worked on the advertising and social animations. And United Entertainment Group developed the consumer activation, including an 18’ x 20’ climbing wall, photo booth and influencer program. It’s supported by a paid social program and a Facebook event to support Global Climbing Day.

Like many in the outdoor industry, the North Face would like to see more people taking up the sport, and ultimately bring it outdoors. Americans are spending less time outdoors, according to the Outdoor Foundation: Overall, 48.6% of Americans said they had participated in at least one outdoor activity in 2016, down from 50% in 2007. That was up a tick from 48.4% the previous year, but people had fewer outings—an average of 11, down from 11.7--overall.

And while outdoor climbing is a fast-growing activity, with a 20.3% gain since 2006, its appeal is tiny: Just 2.8 million people took part in it last year. Indoor climbing and bouldering has a wider appeal—some 4.9 million participants in 2016—but a much slower growth rate of 3.4%. (By comparison, 42.1 million people hiked, and 38.1 million went freshwater fishing.)