Fall Preview: In 'Wisdom Of The Crowd,' Social Media Saves The Day 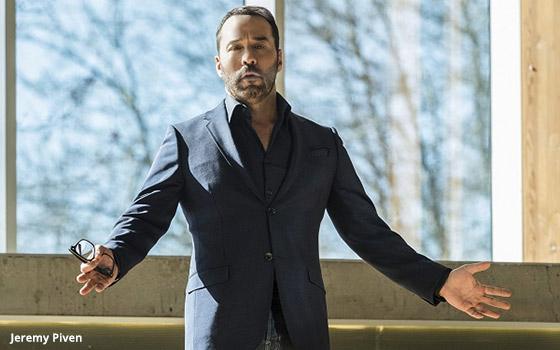 If you believe that crowds have wisdom, then you are more than halfway toward accepting the premise of “Wisdom of the Crowd.”

In this new fall drama premiering October 1 on CBS, a tech genius and billionaire devises a way to harness social media, and smartphone connectivity in general, to help solve crimes.

He believes in “the wisdom of crowds,” which in this show is a school of thought that holds that if you can draw enough people into participating in a project -- in this case, providing bits and pieces of evidence previously unknown to investigators -- then you increase the odds of closing cases.

This CBS drama is right on point where current trends are concerned. This tech titan named Jeffrey Tanner -- played by Jeremy Piven (pictured above) -- is the kind of contemporary hero many people worship these days.

In the fictional world of “Wisdom of the Crowd,” he made his bundle with something he calls “a social-media aggregator” -- an app called “All Sourcer.”

In the series pilot (which I watched this week and which is subject to possible changes before its premiere), Tanner the tech titan decides to chuck it all (translation: sell his stake in his company) in favor of starting up a new platform for crowdsourced criminal investigations.

His motivation is the murder a year earlier of his daughter, Mia. A man was apprehended, tried and convicted for the crime, but Tanner doesn't believe this man did it. So he sets up this new crowdsourcing app that he calls “Sophe.”

At a news conference in the pilot that instantly makes global headlines, he describes his new creation.

“I believe that more evidence would emerge if a platform existed for it to be brought forward,” he tells the media. “That is why I have created that platform. I call it Sophe. … Sophe is real-time, crowdsourced crime-solving. It's a hub where people can submit and dissect evidence.

“Sophe was the Greek personification of wisdom -- your wisdom,” he says, addressing the world at large. “The cops, the courts -- they can only do so much. The rest is up to us.

“I truly believe that Sophe will revolutionize crime-solving. And to prove it I am offering a powerful incentive -- $100 million to anyone that can help identify or apprehend the killer of my daughter. My money is on you, all of you. Good luck.”

So now, someone has come along -- at least fictionally -- to disrupt police work. Another day, another disruption from Silicon Valley (and its vicinity – this show takes place in San Francisco and Oakland).

The show presents a thought-provoking scenario. In the show, this scheme works, which isn't too surprising.

In the pilot, a man suspected of participating in the murder of a young woman -- and possibly more than one -- is captured with the help of Sophe and then the subsequent participation of ordinary people who see him in a train station and converge on him crowdlike, all snapping his picture with their smartphones while the cops move in.

The murder of Tanner's daughter, however, is not yet solved. It figures to be a story arc that will play out over multiple episodes.

It certainly is nice to see a new app reaping benefits for a community -- in this case, making it possible for the general public to help catch a killer in their midst.

However, the scenario in this show raises serious questions about privacy loss, vigilantism and mob rule -- which is something quite different than crowd wisdom.

Tanner himself is fashionably dismissive of privacy rights. “Privacy?” he asks a San Francisco police detective who has been assigned to work with him. “We gave it up a long time ago so we could watch cat videos on our phone[s].”

His team of techies -- young brilliant code writers and hackers -- are equally blasé about the rights of others.

Among other things, they think nothing of hacking into people’s phones and hijacking their GPSes even when the police detective protests that their methods will undermine the eventual criminal case prosecutors will attempt to bring against the perps they catch.

For this show's young techies, the privacy rights that their boss says “we” gave up are non-issues. In fact, this show’s point of view seems to be that losing privacy rights is a small price to pay when we have an opportunity to apply modern high-tech methods to capturing criminals.

And if we create mobs of smartphone-wielding vigilantes, that’s OK too.

tv
2 comments about "Fall Preview: In 'Wisdom Of The Crowd,' Social Media Saves The Day".
Check to receive email when comments are posted.
Read more comments >
Next story loading