For An Afternoon, Trump Is Eclipsed By The Sun And The Moon 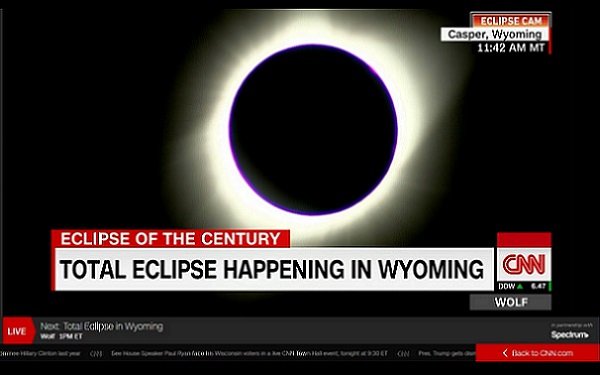 For the better part of Monday afternoon, Donald Trump and his soap-opera White House were eclipsed by news coverage of an event that had nothing to do with politics.

It was a rare occurrence on par with the rarity of solar eclipses. The nation's TV news media turned their collective attention away from Trump to the solar eclipse, tracing its progress from Oregon to the Carolinas. It was a welcome change of pace.

Did you sense something strange in the air -- other than the darkness in the daytime? (Although, truth be told, it didn't get very dark here in New York.)

That's because it was strange -- no overheated on-screen crawls on the cable news channels declaring “Breaking News” about someone on the White House staff, no endless panel discussions parsing the latest utterances of Donald Trump, no Trump analysis or even complaints about Trump.

Thank you, solar eclipse, for driving Trump and his never-ending story off of TV for an afternoon.

Instead, you got an opportunity to experience something unique taking place in scores of communities across the nation as the news channels and the broadcast networks captured the oohs and ahs from town to town all along the narrow eclipse band running basically through the middle of the United States.

In place after place, suddenly it was dark and then it was not. Observers interviewed on lawns and in public parks after the sudden darkness lifted all declared their amazement at what they had experienced.

It was a happy afternoon in America. Everyone focused on something far, far away that demonstrated that the problems of Donald Trump could be ignored for a few hours and nobody would get hurt.

At some point during the eclipse hoopla, word came that Trump was suddenly scheduling a nationally televised speech for Monday evening. This news was not reported on CNN, at least not right away. Instead, it came my way via a news release from CBS News acknowledging their plans to air the speech live that evening.

I then went in search of more information about this speech and found none. Then, sometime later when the veil of non-coverage that had shrouded President Trump in semi-darkness during the solar eclipse began to lift, I learned this speech would have him likely announcing a new strategy in Afghanistan.

The timing of the speech indicates perhaps that Trump himself had realized he had been eclipsed by the sun and the moon on Monday, and if he wanted to put himself back at the center of the media's universe, then a nationally televised speech would be in order.

Soon, the eclipse for which an entire nation stopped what it was doing had come and gone. By evening, the “news” had returned to normal -- covering Donald Trump and his presidency from head to toe.