ESPN Gripped By Fear Of Memes And Jokes Over 'Robert Lee' 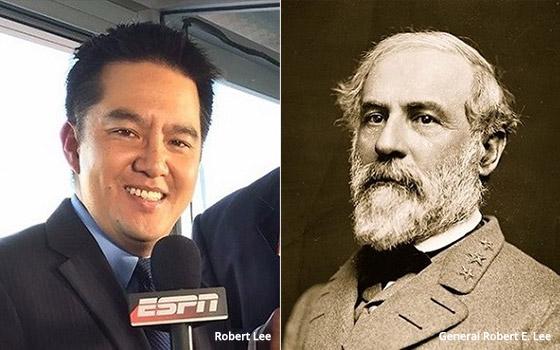 Just the fact that we’re even thinking about these things speaks volumes about where we are as a society today.

And so it came to pass that an Asian-American named Robert Lee was put in a position to consider whether he should withdraw from calling a college football game for ESPN because his name is too similar to Robert E. Lee's and the game happens to be scheduled to take place in Charlottesville at the University of Virginia.

Jumping Jehoshaphat! Really? What would have happened if he had called the game? A riot? People might have accused him of commanding the Confederate Army of Northern Virginia?

I mean, who on Earth would mix up this Robert Lee with Robert E. Lee (both pictured above)? The modern-day Robert Lee doesn't even have a beard (or the middle initial of “E”)!

Who knows if any repercussions would have occurred over this innocuous regional football assignment?

The fact is, no thought whatsoever about the ramifications of this man named Robert Lee venturing below the Mason-Dixon line on September 2 for the U.Va. season home opener should have been given to this decision.

But here we are, a week or two after the clash of Nazis and leftists in Charlottesville that has the entire nation looking askance at our public statues and monuments and also, apparently, parsing people's names for their resemblance to Confederate generals.

How ridiculous is the act of even noticing and then discussing the similarity between this Asian-American's name and the other Robert E. Lee! Are we really this touchy now?

What if you happen to have a lovely wall made of stone surrounding your property? Are you supposed to now cease calling it a “stone wall” lest you trigger a terrible emotional upset for someone else who might then be reminded of Stonewall Jackson?

To back up this TV Blog for a second, here is what happened. News broke late Tuesday night and Wednesday morning (in the way that news breaks and spreads like wildfire on the Internet whether it is true or not) that ESPN had yanked their Robert Lee off of this game because network execs feared that social media would lambast them for this obvious and egregious gaffe.

Imagine! Assigning a sportscaster named Robert Lee to a football game to be played in Virginia! For shame!

The Twitterverse weighed in, of course, and plastered ESPN with all sorts of names and abuse. The worst one I saw referred to ESPN as the MSNBC of sports networks. Ouch!

But wait, there's more. ESPN insists that the media's knee-jerk characterization that ESPN swooped in and “yanked” this Robert Lee from covering this game (which apparently was to be live-streamed, not aired on TV) was inaccurate.

ESPN reps characterized the issue of this man's name as merely a subject ESPN raised with Robert Lee himself who was given the option of reassigning himself to another game.

On Wednesday, one ESPN press rep circulated a message that an unidentified ESPN exec sent to a journalist via Twitter. This message was employed by the press rep in order to clarify and explain ESPN's stance in this matter.

The message articulated ESPN's reasons for raising the issue of this man's name and its similarity to Robert E. Lee's. “This was not about offending anyone,” the message said, possibly referring to Robert Lee and his last name of “Lee,” which happens to be a common surname in the Asian-American community.

“It was about the reasonable possibility that because of his name, he would be subjected to memes and jokes and who knows what else,” the message said. “Think about it. Robert Lee comes to town to do a game in Charlottesville. The reaction to our switching a young, anonymous play by play guy for a streamed ACC game is off the charts -- reasonable proof that the meme/joke possibility was real. … Eventually, we mutually agreed to switch.”

This ESPN exec is entitled to his opinion -- but his fear of memes, jokes and other wisecracks is not only unfounded, but seems, at best, overly cautious. Haven’t the folks at ESPN heard the old saying “Sticks and stones will break my bones, but words will never hurt me?”

Maybe they felt someone would throw sticks and stones, or worse, at their Robert Lee. But by this message's own admission, this guy is a “young, anonymous play by play guy” (which he must have been delighted to find out, by the way). Nobody would have cared about him or noticed his name in the first place.

In a way, you can't blame ESPN for coming up with this line of thinking since everybody is doing it these days. I even had similar thoughts when I embarked on the writing of this TV Blog about Robert E. Lee, lest anyone take offense at the mention of his name or the sight of his picture. If any offense is taken, the TV Blog sends its regrets.

tv
6 comments about "ESPN Gripped By Fear Of Memes And Jokes Over 'Robert Lee'".
Check to receive email when comments are posted.
Read more comments >
Next story loading