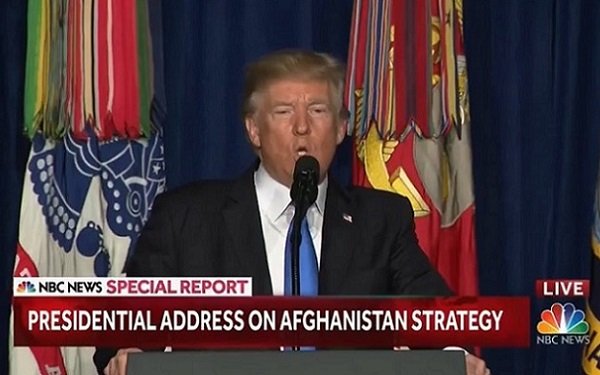 To prepare for writing this TV Blog, I expected something entirely different when I watched Monday night’s Trump speech on his new Afghanistan strategy and then watched the speech he gave on Tuesday to supporters at the Phoenix Convention Center in Arizona.

According to the narrative I had absorbed from the media I am generally exposed to -- a smattering of TV, newspapers (online or not) and social media such as Twitter and Facebook -- Trump’s Monday speech (photo above) got high marks for its delivery, serious tone and the clarity of its message.

And then, according to the prevailing narrative, Dr. Jekyll became Mr. Hyde on Tuesday when he spoke at the Arizona rally and galvanized his base with his merciless abuse of the “dishonest media.”

The narrative seemed to be: Donald Trump was at it again -- acting properly “presidential” in his Monday speech and then, on Tuesday, morphing into schoolyard-bully Trump, the guy who campaigned for and won the presidency with speeches like the one he made in Arizona whipping up a crowd to the point where they were all chanting “CNN sucks!” in unison.

This “angry Trump” on Tuesday had the effect of negating any goodwill or support he may have gained with his more reasonable, “presidential” speech on Monday, the media narrative seemed to conclude.

Of course, Monday's speech benefited from the fact that it aired live in prime time. Tuesday' speech did not get nearly the same exposure.

I watched both of these speeches a few days later -- on Thursday -- in their entirety on C-Span. I had to agree with the narrative about Monday’s speech. Whether or not you agreed with Trump's take on Afghanistan and the plan he has for making military and economic progress there, the speech was presidential.

Delivered before an audience of cabinet members, military officers and service people at Ft. Myers, Virginia, President Trump used words and phrases that left no doubt about the aims and goals of his new Afghanistan program.

He said the plan is based on a doctrine he called “principled realism” and vowed: “We are not nation-building again. We are killing terrorists.” The speech lasted roughly 23 minutes.

However, where Tuesday's speech was concerned, I found no evidence of the “Mr. Hyde” that the media said suddenly appeared in Phoenix. Instead, I thought Tuesday’s speech was masterful.

He used the phrase “failing New York Times (which he has used many times before),” claimed several times that CNN’s ratings are in decline (leading to the “CNN sucks” chant), referred to George Stephanopoulos as “little George Stephanopoulos” and implied that The Washington Post is little more than a marketing and promotion offshoot of Amazon (since the paper is now owned by Amazon founder Jeff Bezos).

These verbal salvos at the “fake media” came about 15 minutes into this speech, which ran for about an hour and 15 minutes.

The media-blasting portion of the speech lasted for a while. Trump launched into it for two reasons. One was that this was one of those themes that apparently appealed to this kind of audience -- as Trump well knows. As expected, they ate it up.

The other reason was along those same lines. Specifically, Trump wished to set the record straight about what he said in the hours and days following the violence in Charlottesville. He read his various statements aloud and accused the “dishonest media” of misreporting his words and actions in each case.

Essentially, his gripe was that the news media cherry-picked from his statements and, in his view, omitted words, phrases and sentences that would have gone against the story they wanted to do -- which was that the president gave solace to neo-Nazis and didn’t condemn them forcefully or fast enough.

I will leave this issue for others to debate. For me, the point is how well Trump performed in both of these speeches. In Arizona, where he spoke at least partially without a script (or so it seemed), he was relaxed and, dare I say it, entertaining.

As a journalist myself, I don’t get very hot and bothered by the president’s attacks on news media. If I’m being honest, I find his statements outrageous and hilarious.

A crowd chanting “CNN sucks”? That should only concern CNN. To me, it was about as serious as home-team fans chanting the same thing about a visiting team at the ballpark. Sure, it’s not very polite or sportsmanlike, but this is what we do in America.

Trump’s over-riding point that the bulk of what he said in the Arizona speech would not make it onto any of the news reports was also on point. But he was also dismissive of this situation (while at the same time complaining about it).

Thanks to social media, he said, he doesn’t need the “fake” news media anyway. Twitter, he said, gives him a means of evading them entirely.

And he had another choice phrase for journalists who go into a tizzy when they perceive Trump unleashing a late-night “Twitter storm.” “These are sick people,” the president said.