Americans are voracious consumers of digital video. That video is social and shareable makes the medium even more compelling both for users and the marketers who want to reach them.

It’s no secret that social platforms—Facebook, Snapchat, and Twitter—are moving aggressively into video content, and, in the case of Facebook, into original video content. Of course, these platforms are looking to grow their digital video ad revenue from this content and are eager to capture brand marketers’ video budgets. 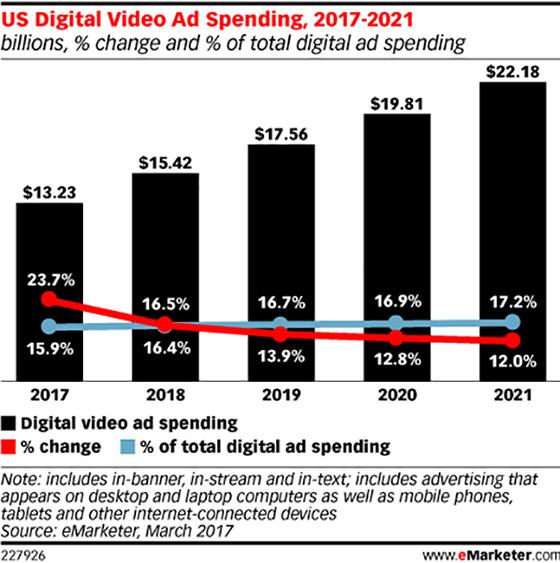 “Consumers—particularly young people—are viewing video programming on more devices and in more destinations than ever before, and social platforms want to capture their attention,” stated Debra Aho Williamson, eMarketer principal analyst and author of a new report, “Video Advertising in Social Media 2017: Showtime for Facebook, Snapchat and Twitter.”

An article about the eMarketer report suggests  social platform companies are eyeing the broader digital video ad business to extend beyond their endemic businesses. The digital researcher forecasts that U.S. digital video ad spending outside of social platforms will reach $13.23 billion this year, up 23.7% from 2016. By 2021, that spending is estimated to reach $22.18 billion.

The eMarketer forecast doesn’t include video outlays on social platforms in its digital video ad spending forecast; it counts them in its rich-media forecast. Rich media is projected to be a $10.33 billion market in the U.S. this year and includes ad types such as flash, JavaScript, and video that doesn’t appear as part of a video player.