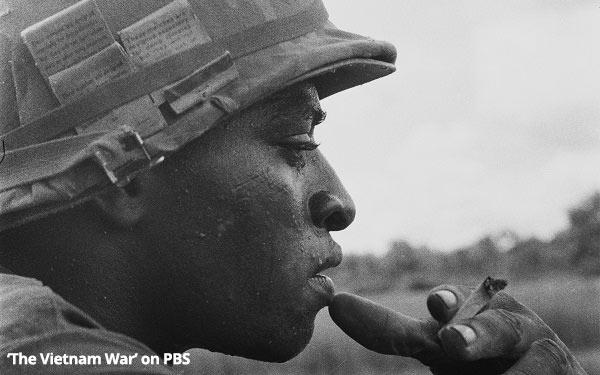 In September 2007, I wrote “This is the big one” to lead off a review of “The War,” Ken Burns’ 14-hour documentary about World War II.

It turns out the sentence was wrong. This is really the big one -- “The Vietnam War,” running 18 hours and directed by Burns and Lynn Novick. It is scheduled to air in 10 parts beginning Sunday, September 17.

This might come as no surprise to anyone familiar with “The War” or “The Civil War,” Burns’ epic classics about warfare, but like those, “The Vietnam War” figures to be the standout highlight of the fall television season -- the best thing on, by far.

It is more than just a television show. It is an experience. Ten years in the making, the care and diligence that has been taken and applied to the construction of this documentary is evident in every frame.

It is a wonder to behold, fascinating, illuminating, deeply moving -- so much so that its impact at times is like an emotional body blow.

This film covers the history of southeast Asia from the colonization by the French in 1858 to the end of the war in 1975 and beyond. The meat of its story is the 1960s and how the war intertwined with, and was a central cause of, the social upheavals for which the decade is famous.

While one can always insert a snarky criticism here (as I usually do) about how PBS is obsessed with the ’60s because its audience and potential donor pool is made up mostly (if not chiefly) of aging Baby Boomers, that would be wrong here.

It is true that the story of the Vietnam War and tales of the decade's protest movements and its clothes and culture have all been told before on PBS.

But it is a singular skill of the folks at Florentine Films -- the name of the Ken Burns documentary factory -- that they can take a subject like this one and put together so much new testimony and unearth so much imagery that has been seldom or never seen before that you end up understanding this story, which you thought you knew, in entirely new ways and from new angles.

This has long been the secret to these Burns documentaries. They are just so painstakingly put together. For example, the film and video footage seen in the “The Vietnam War” seems as if it could have come from hundreds of sources -- network television storerooms, government archives, even from North Vietnam.

The interview subjects are equally wide-ranging and shrewdly chosen, including war veterans from all three sides -- American, North Vietnamese and South Vietnamese, former government officials from all three, various veterans of the protest movement, journalists who covered the war, and family members whose sons or siblings fought in it.

Their stories are endlessly absorbing and new. As the stories pile up, tracing the descent of the divided Vietnam into chaos throughout the post-World War II era, you become gripped by a feeling of great foreboding as the situation becomes irretrievably worse with each passing year.

By the time the documentary reaches the buildup of American forces in 1964 and ’65 (Part 3), you are left with the impression of how screwed up the whole thing was, how wrong everybody's judgement was, how wasteful and dishonest the government was (principally Lyndon Johnson and his advisers), and how chaotic and tumultuous America became.

It was a harrowing time, particularly for those of us who were children in the 1960s. For better or worse, this documentary brings it all back home in a way no other documentary on the war and its era ever has.

It is almost never said of a TV show -- at least by me -- but “The Vietnam War” is a masterpiece. It is not to be missed.