Half Of All Display Traded Programmatically In Europe 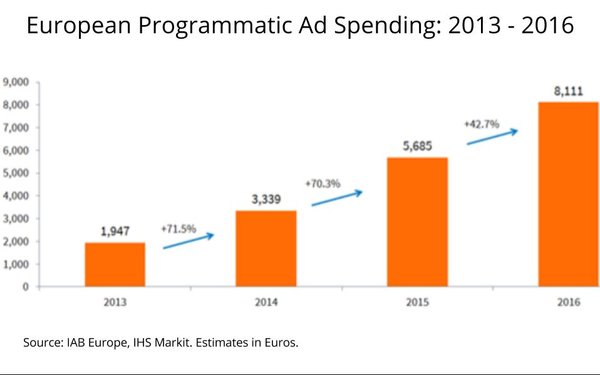 Half of all European display advertising is now traded programmatically, according to findings of a study conducted by IHS Markit for IAB Europe, released this morning at the dmexco conference in Cologne, Germany.

The study estimates that Europe’s programmatic display ad marketplace has expanded 42.7% to $9.7 billion in 2016.

The report finds that video is the fastest-growing segment of Europe’s programmatic media-buying marketplace, expanding 155% to a 45% share of all video advertising in 2016.

“Europe is now programmatic-first,” stated Daniel Knapp, executive director, TMT at IHS Markit. “In a big leap, programmatic transaction mechanisms have matured and enjoyed large-scale adoption, up from 18.3% of spend in 2013 to 50.1% in 2016.”

However, he noted that adoption of programmatic trading remains “uneven” across European markets, with “less mature advertising markets lagging behind market leaders such as the UK or the Netherlands. Growth in online advertising now largely means growth in programmatic, but uncertainty related to the evolving EU regulatory landscape on the collection and use of data puts in question the degree to which companies will be able to realize future growth.”