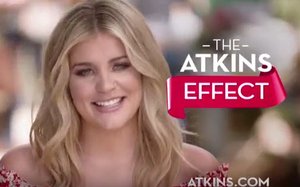 Atkins Nutritionals has launched new creative aimed at consumers who take a “self-directed” approach to healthier nutrition, as well as new ads targeting its core audience of people seeking a branded program to lose weight.

The new ads are an extension of a “hidden sugars” campaign launched in January 2017. They also represent a continuation of the brand’s repositioning itself as “Today’s Atkins”: a nutritionally balanced, low-carb way of life, as opposed to a diet. (The term “diet,” now considered passé or downright politically incorrect, is never used in the Atkins ads.)

Three of the new TV ads are launching today. These are geared to people who aren’t necessarily looking to lose weight, but want to reduce their intake of sugar and simple carbs that quickly convert to sugar when digested — the “hidden sugars” (otherwise known as “glycemic loads”) to which the campaign refers.

The creative declares that “sugar is the enemy of protein,” because sugar reduces the benefits of consuming protein.

In two of these 30-second ads, a woman explains that certain foods that have significant protein levels — like a bagel or a bowl of steel-cut oatmeal — also have high levels of hidden sugar. In a third ad (below), a member of a women’s bicycling team points out that some high protein snack bars also have high hidden sugar content.

In each case, the ads then present Atkins products, such as bars and shakes, as healthier alternatives that help people consume fewer carbs and hidden sugars — benefits dubbed “The Atkins Effect.”

The three ads also stress that you don’t have to be “on” Atkins or “doing” Atkins in order to realize the lower carb, lower hidden sugars health benefits of Atkins products.

The other two new TV ads, launched in the first week of September and featuring country singer Lauren Alaina (shown above), also promote “The Atkins Effect,” but target people seeking a weight-loss program, or what Atkins calls a “programmatic” approach.

In a 30-second spot, Alaina reports that she lost 30 pounds on Atkins, but stresses that "this isn’t just a before and after story; this is ‘Today’s Atkins,’ and the effect it can have on the rest of your life. Because now, cutting carbs and choosing healthy proteins and fresh foods is second nature to me.” She then promotes Atkins Chocolate Chip Granola Bars as snacks that “have the protein you want without the carbs and added sugar you don’t want.” In a 15-second ad, Alaina promotes Atkins Harvest Trail Bars with the same high-protein/low sugar benefits approach.

The creative, also being employed for paid advertising on Instagram, Facebook, Hulu and connected TV channels, is from Acme Idea Company, Atkins’s creative agency of record.

Atkins is benefitting from and building on Americans’ growing understanding of the benefits of healthy proteins, fats and (unrefined) carbs, along with ample vegetables and fruit, Parker adds. In the brand’s recent research among a representative sample of U.S. adults, more than half indicated that the next time they want to lose weight, they would reduce carbs and sugar intake, he says.

“We think that Dr. Atkins would be proud: We’ve fought through the misperceptions about the program and made a lot of headway,” he says. While some competing branded programs experienced struggles in recent years, Atkins has seen revenue growth in the low double digits each year for the past eight, according to Parker.