Seen One Bumpy-Headed Alien And You've Seen 'Em All 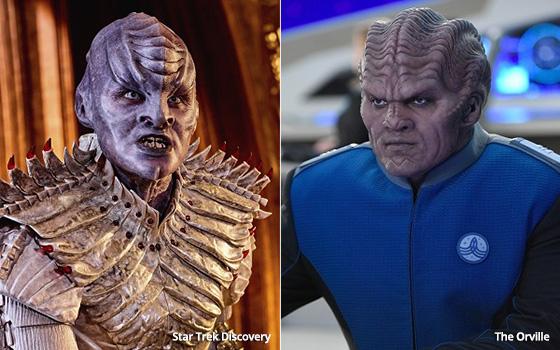 ’Tis the season of bumpy-headed aliens.

It is a physical manifestation I have never quite understood. If its evolution is ever explained in the many versions of “Star Trek” and other space operas that have come and gone on TV, then these explanations have eluded me.

Why all the bumps? Do these extraterrestrials need some sort of extra-cranial protection? From what? Assaults by other aliens wielding heavy clubs of some sort? Extra-dense coconuts, indigenous only to their planets, falling on their heads?

For whatever the reason -- aesthetic or evolutionary -- the bumpy-headed alien has long been a staple of these futuristic space shows.

This fall, they can be seen on “The Orville” (above right), the fanciful (and somewhat hard-to-peg) space show on Fox conceived and headlined by Seth MacFarlane, and the new “Star Trek: Discovery” coming to CBS and then CBS All Access starting this coming Sunday (photo, above left).

For “The Orville,” its airing on Thursday (September 21) at 9 p.m. Eastern will represent its regular time-period premiere following two episodes that already aired on the last two Sunday nights (September 10 and 17).

With “The Orville” now leaving its temporary Sunday night perch, the coast is clear for “Star Trek: Discovery” to take up residence for one week only on this coming Sunday (September 24) on CBS.

The premiere episode of “Star Trek: Discovery” is being offered free of charge starting at 8 p.m. Eastern on CBS (or whenever football runover allows). In its airing on the CBS network, the show will have commercials.

This new “Star Trek” represents a test, of sorts, for the CBS streaming service to determine if the production of a high-profile, seemingly surefire new series such as this can serve as a lure to significantly drive up the service's sub count.

Let the rest of the streaming service universe traffic in critically praised esoterica with smallish audiences such as “The Handmaid's Tale” on Hulu. CBS apparently aims to find out whether it can earn subscription fees with something a lot more straightforward such as yet another “Star Trek” series.

CBS is holding screenings for the new “Star Trek” premiere in L.A. and New York, but the usual previewing opportunity -- in which TV critics get access to shows via the proprietary media Web sites the networks maintain -- is not being provided in advance of the show’s premiere. That is an unusual, but not unheard of, occurrence.

Maybe CBS feels there is so much keen interest in this new series that it dare not entrust the nation’s TV critics with access to it. I share their distrust of TV columnists, but if I am provided with an opportunity to watch this new “Star Trek” in advance, I promise I will guard it with my life.

Without a preview opportunity to go on, it is difficult to determine the value, worth or quality of this new “Star Trek,” which is the fourth “Star Trek” series made for television.

The pictures on the CBS media site -- such as the photo of the bumpy-headed alien above -- show a “Star Trek” that seems not too different from the ones that came before it (and all the movies too).

Various members of the star ship Discovery’s diverse crew -- some of them aliens and some not -- have very striking physical characteristics like all those who have gone before. Speaking of “going before,” here’s a wild guess: The ship will explore strange new worlds [and] boldly go where no man has gone before.

The ship’s captain and crew will meet various residents of distant planets – some hostile and some not. I expect great battles to ensue that imperil the ship and shake the very cameras that will simulate the effects of exterior bombardments.

As you may be able to tell, I am no “Star Trek” fan. But let the record show that I possess no animus toward those who love “Star Trek” and won’t mind at all ponying up a subscription fee to watch it on CBS All Access.

May these people -- and CBS too -- live long and prosper.