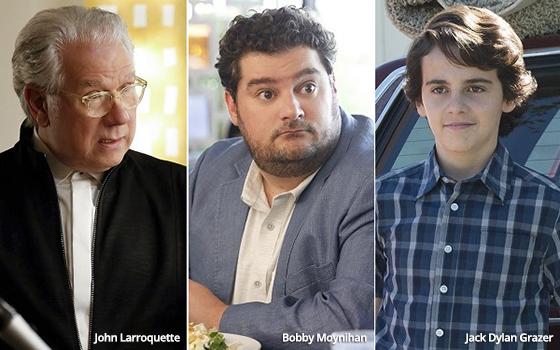 When John Larroquette was 40 years old, it was 1987 and he was in the midst of his run on “Night Court” on NBC.

Many of us can picture him in the show. If memory serves, he had dark hair. Today at age 69, his hair is white. One thing we can all agree on: John Larroquette at age 40 looked nothing like Bobby Moynihan looks now.

The reason for bringing this up is this: Moynihan, most recently seen on “Saturday Night Live,” is currently 40. And he and Larroquette are playing the same character, but at different ages, in this new CBS sitcom premiering Monday night called “Me, Myself and I.”

The Larroquette version of the character is supposed to be 65 (Larroquette happens to be 69, but no matter).

Based on what these two look like, you might not believe they are the same person. And yet, this show’s implied desire is that you suspend this disbelief. Some people are able to do this, but I am not.

One of the problems here, at least for me, is this: Moynihan is 5 foot 8, while Larroquette is 6 foot 5. Therefore, on a very basic level, the premise of this new sitcom is just plain nuts.

The title of the show actually refers to three versions of this man. The third one is his 14-year-old self in 1991. The boy version is played by Jack Dylan Grazer, a nephew of spiky-haired Hollywood producer Brian Grazer.

The device for making this work (although that's a matter of opinion) is the intercutting of flashbacks, present-days and flash-forwards.

In this way, we learn the story of this man's life. Among other things, we learn that he was a precocious child who liked to invent things. He grew up first in Chicago, where he loved the Bulls, but then had to move to Los Angeles, where people loved the Lakers.

As a 40-year-old, he is getting divorced and still trying to invent something that will allow him to strike it rich.

At its heart, “Me, Myself and I” is a gimmicky show. The gimmick is this offbeat way of telling its story, which could have just been told in any number of “linear” ways.

The show seems designed to serve a Millennial audience. The character was born in 1977, came of age in the ’90s, and is struggling in his career and love life at age 40.

But by age 65, he emerges as a triumphant gazillionaire who leads an ultramodern company whose employees adore him -- which is something of a fantasy among Millennials (and a lot of other people too).

My problem with accepting “Me, Myself and I” may have something to do with an ailment afflicting new network TV shows that I like to call pilot-itis.

Many TV shows falter in their first episodes, only to improve later on, because the first episode requires that all the characters get introduced and their stories and situations get explained.

When you have a show such as “Me, Myself and I,” the exposition process in the premiere is even more unwieldy than usual because of this show's need to suddenly intercut between time frames in order to establish its tripartite story. This show's pilot-itis is acute indeed.

Of the three storylines in the pilot, I least enjoyed the 14-year-old's story, which deals with whether or not he will make friends at his new school in L.A.

TV seems endlessly fascinated with the cliched story of young teens facing the challenge of fitting in socially. For me, however, it’s a “who cares?” storyline that has been done to death.

While the show's two other storylines are marginally more palatable, due mainly to Moynihan and Larroquette, the one thing that was missing for me in the premiere of “Me, Myself and I” was that reaction that one always hopes goes hand-in-hand with the watching of a TV comedy -- laughs.

Unfortunately, as pleasant (or at least bearable) as portions of this show were, I don't think I laughed even once. It has become a problem throughout the world of TV comedy lately: Sitcoms that for reasons unknown go for subtlety instead of guffaws.

Perhaps “Me, Myself and I” will generate laughs in episode two, after all of its complications are sorted out on Monday night.