New For Fall: In ABC Drama, Life Gets Complicated 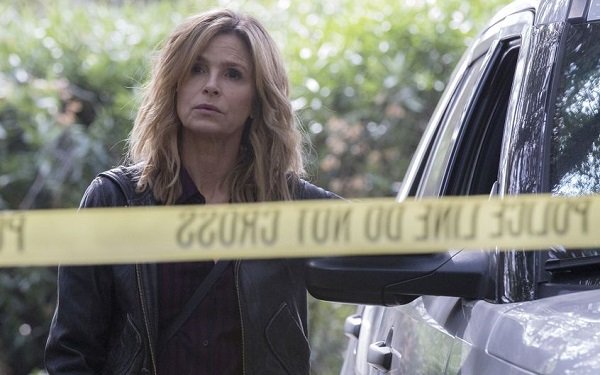 For evidence that life can be complex, I give you “Ten Days in the Valley.”

This new ABC drama series starring Kyra Sedgwick is so complicated that it almost rates the coining of a new drama category -- the compli-drama.

Other ABC shows such as “How to Get Away with Murder” and “Scandal” traffic in similar complexities with character after character who reveal over the course of multiple episodes that they are harboring all kinds of secrets.

In “Ten Days in the Valley,” the principal secret-harborer is the Kyra Sedgwick character, a brittle, high-strung Hollywood TV scriptwriter and journalist.

She's divorced and locked in a seemingly constant battle with her ex-husband over custody of their small daughter. The ex-husband, a musician, happens to be an addict too.

When their daughter goes missing in the wee hours of the morning -- the apparent victim of a kidnapping -- the police enter the lives of the screenwriter and her ex, and through their investigations threaten to unravel and lay bare the many secrets the two have hidden away.

Not to be outdone, everyone else has secrets too -- including the Salvadoran housekeeper, the young, willowy blonde nanny and even at least one cop.

What did George Costanza say so famously in a “Seinfeld” episode? “This thing is like an onion!” And so it is.

Sedgwick is the star and the dramatic center of the show. With her personality flaws and defects, this new character, Jane Sadler, will remind many of Brenda Leigh Johnson, the police detective Sedgwick played on “The Closer.”

Deputy Chief Johnson's vice happened to be sugar and empty calories (her desk drawers were filled with candy) but in her own way, she was wound as tightly as this new character.

The big difference is, Sadler is a high-functioning addict who resides at least partly on the wrong side of the law. She's the kind of person Deputy Chief Johnson would have shredded in an interrogation room.

And there is another difference between the two that might be even more significant: Brenda Leigh Johnson was someone you liked, and who you rooted for. Jane Sadler is just the opposite.

In the first two episodes of “Ten Days in the Valley” that I watched, there was nothing about her that was likable at all. And yet she is supposed to be the reason for watching the show.

It's a curious thing: She is an antiheroine, but unlike TV's many antiheroes, you don't root for her to succeed. Maybe that's a subject for a future TV Blog.

When it comes to the weaving of complicated webs, “Ten Days in the Valley” seems to want to outdo all previous such drama shows. It requires that its audience pay extremely close attention, something not everyone is keen on doing when they watch TV.

Is the show worth all of the effort it requires to track all of the secrets everybody is concealing? A clear answer to that question does not emerge from the first two episodes, but I will admit to being at least mildly curious about how this story turns out.

“Ten Days in the Valley” premieres Sunday night (October 1) at 10 Eastern on ABC.