How To Engage The Millennial Market? Engage Young Men

What’s the best way to build influence among the Millennial generation? Engage young men. In a surprising twist, Millennial men are 50% more likely than the women of their generation to drive brand conversations, and not just in a few select categories. They’re emerging as key consumer influencers across the board, from sports and auto to travel and children’s products.

Most surprisingly, young men are now more influential in several categories that women have long dominated. In our new research, we uncovered some unexpected facts that illustrate just how much Millennial men are breaking away from gender stereotypes.

Millennial men have 12 brand conversations a day – 20% more than their female peers.

At 14%, more of them qualified as key influencers, which we define as people with large real-world social networks and who frequently give advice about dozens of leading products and services, than any other age group of men, and they are nearly tied with teenage and early 20s women for social influence. Another indicator of Millennial men’s influence is that they discuss brands in 12 conversations each day, compared to their female peers, who have 10 brand conversations during an average day. It’s also more than older men, who average seven brand-related conversations a day.

Millennial women no longer prevail over beauty and apparel.

Unlike earlier generations, young men put less emphasis on the traditional masculine image and more on grooming and individuality. They’re 69% more likely than all men in our studies to be influencers in the beauty category, and 47% more likely to be influencers in the retail and apparel category. This is consistent with a finding by GlobalData that 72% of Millennial men believe their looks and appearance are important. As a result, Millennial men are now almost as likely as their female peers to discuss beauty and apparel brands. 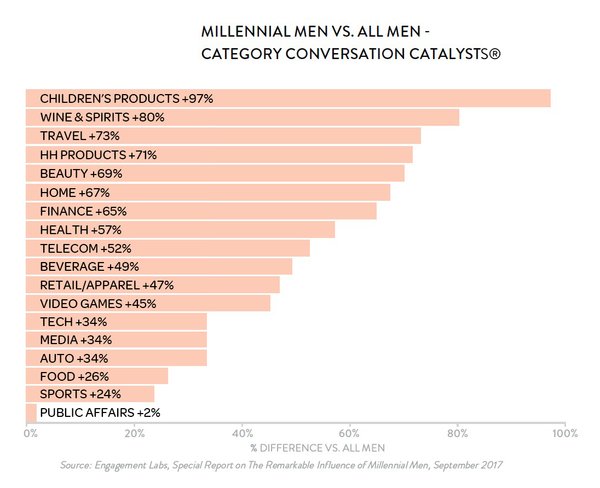 Young men are far more influential than their fathers in “domestic” categories.

Millennial men also defy expectations about the categories they talk about compared to older men. Partly because of the stage of life, Millennial men are much more likely than men as a whole to recommend children and household products, in addition to travel, retail and apparel—reflecting their new well-rounded perspective. Indeed, their influence is far greater than that of other men in every consumer category measured.

Millennial men stand in stark contrast because they’re defining themselves differently than previous generations. “Masculinity today is going through seismic changes. More than ever, guys are rejecting rigid male stereotypes,” said Matthew McCarthy, senior marketing director for Unilever’s Axe. This new view of men is clear in Axe’s “Find Your Magic” campaign, which has picked up perfectly on this new mindset among Millennial men.

This has major implications for marketers. For some categories, such as household products or travel, this will mean creating entirely new strategies targeted at this lucrative segment. Our research underscores how important it is for brands to deliberately enlist these younger men in their efforts to introduce or re-introduce products and services of all kinds.

Beyond acknowledging this new and evolving male identity, marketers need to understand the conversations young men are having about their brands — and their competitors’— as well as the channels they’re using to make recommendations to family, friends and colleagues.

Brands also should design advertising that reflects how Millennial men view themselves. Show them making educated decisions at a supermarket or in an apparel store. Or, create a campaign in which young couples are engaging together in consumer decision making.

Most importantly, embrace the image of younger males as “smart shoppers” across a wider variety of categories, especially those that seem counterintuitive. Those brands willing to break gender stereotypes are the ones most likely to drive social influence among the men and women of this generation.