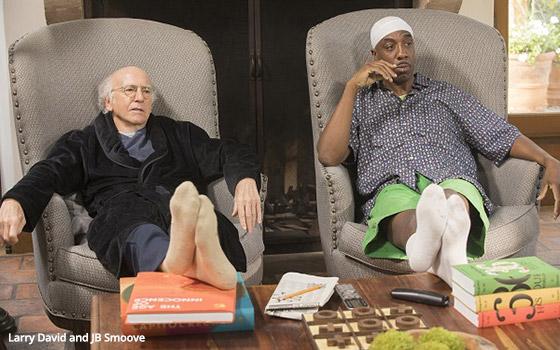 Larry David took six years off between seasons of “Curb Your Enthusiasm” -- five years less than the cast, writers and producers of “Will & Grace” took off before coming back last month on NBC.

Their hiatus lasted 11 years, and the new “Will & Grace” feels like the old show, only better -- reenergized and rejuvenated.

“Curb Your Enthusiasm” came back for a ninth season this past Sunday on HBO and the show feels, well, pretty much the same, only less so.

Not that “pretty much the same” is such a bad thing if the show you are describing is “Curb Your Enthusiasm.”

The problem here was not so much the situations David set up for himself in last Sunday’s season opener. The problem was that, unlike the show's past seasons, the comedy here seemed forced, and at times even obligatory.

For example, in last Sunday's episode -- the first of 10 that will encompass this new season -- Larry and Susie (Susie Essman) got into a bitter argument practically from the moment she entered the room.

Yes, the two were always known for these battles -- and Essman in particular for her comedic spewing of the f-word -- but in this scene, there was no rhyme nor reason for them to suddenly get into this pitched battle other than that the audience expected it.

Other scenes seemed similarly over-played such as the opening scene in which Larry was seen taking a shower and becoming frustrated by the difficulty of opening the spout on his shampoo bottle.

From the previous eight seasons of “Curb Your Enthusiasm,” we all know that in Larry David Land, frustration can erupt in all sorts of exaggerated ways stemming from any number of small things.

However, this particular bout with a shampoo bottle seemed extreme even for him. In putting this gag across, he expended so much effort that it seemed forced.

The same could be said with the first conversation seen in the episode between Larry and his friend and nominal sidekick Leon (JB Smoove) in which they suddenly dove into a conversation about African-American slang for no apparent reason.

In the show, Larry was seen presenting his manager Jeff (Jeff Garlin) with the script for a musical Larry had been writing for five years titled “Fatwa!” -- which was to be a comedic treatment of Iran under the rule of the Ayatollah.

This seemed inspired by “The Producers” and its musical within a musical, “Springtime for Hitler.” “The Producers” was the subject of a previous season of “Curb Your Enthusiasm.”

Also in the premiere last Sunday, Larry ran afoul of a lesbian couple, argued with a barber, fought with his friend Richard Lewis over a dead parakeet, and became frustrated by his assistant (played by guest-star Carrie Brownstein of “Portlandia”) after she took two full days off from work because she was constipated.

Sure, it was all funny. How could it not be? Larry David is a naturally funny man, and when he's doing scenes -- improvised or not -- with the likes of Susie Essman, JB Smoove or Richard Lewis, the scenes will inevitably be funny.

And yet, the premiere episode of this new season of “Curb” seemed flat. Now, if Larry David was to read this -- which I doubt he ever will -- he might become frustrated by the opinion expressed here.

Most likely, though, fans of the show will enjoy this new season. It has everything they have come to expect and almost nothing that will surprise them.

In a throwback to an era of TV when such things were a staple of TV comedy, “Curb Your Enthusiasm” even has its own catchphrase when Larry expresses satisfaction in a situation by reciting the phrase “Pretty good! Pretty, pretty good!”

Sure enough, he did this in last Sunday’s episode. You half-expected a studio audience to suddenly applaud as if this were an old sitcom from the ’80s or ’90s and Larry was Gary Coleman saying, “Whatchu talkin’ ‘bout, Willis?”