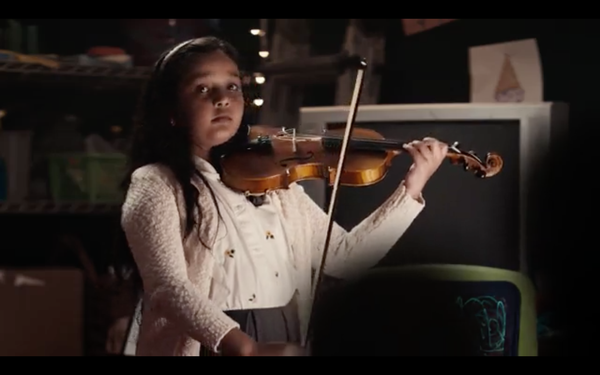 Toys R Us isn’t letting bankruptcy stop its efforts to win customers back to its stores, unleashing a new “Champions of Play” campaign, using TV spots, augmented reality games and even experiences aimed at grown-ups.

The new positioning “comes straight from the consumer,” says Carla Zakhem-Hassan, executive vice president and CMO of the chain, “and the research that free play is under attack.” Alarmed by the realization that 8% of third-graders have never had recess, one in three kids has little to no recess and kids spend 50% less time in unstructured play than they did in the 1970s, “we thought, as leaders in the play category, how do we not celebrate free play?”

Part of the campaign involves an augmented-reality game called PlayChaser, a mobile app developed for the retailer by PlayFusion, designed “to magically bring our toy stores to life,” she tells Marketing Daily. The app includes about ten games throughout the store, starting with a greeting from Geoffrey the Giraffe when kids enter. For now, it focuses on private-label toys and is available in some 23 stores, and she says she expects it to be rolled out nationally by the end of October, and expand to include more brands.

The game ties into loyalty programs and can provide shopping incentives, “and will really allow us to understand behavior, what kinds of kids are playing which games, and interested in which toys. But the main objective of the app is to bring stores to life, bring people in and drive sales,” she says. It’s also adding Play Labs to 42 stores, which invite parents and kids to sit down and test some of the season’s hottest toys. “These are ways to separate us from our more digital competitors.”

Toys R Us needs to find ways to fight the online onslaught if it’s to survive, experts say. The shift to online shopping “has fundamentally changed the economics of toy store retailing,” writes Neil Saunders, managing director of GlobalData Retail, after the Chapter 11 filing. “We estimate that in 2016 some 13.7% of all toy sales were made online; that’s up from 6.5% five years ago.”

New TV spots from BBDO Atlanta also hinge on the importance of play, as kids rise up to protest lessons, violin practice and playdates. (As the ringleader points out, “We’re too young for dates!”)

While the message is aimed primarily at kids and will become increasing focused on specific products and brands as the holidays approach, Zakhem-Hassan says the campaign also includes components aimed at adults. Later this week, it will introduce a life-size Etch a Sketch at the Fulton Street subway station, for example. “We’ve got to help people know free play is serious business,” she says, “and the Etch a Sketch activation will get the word out to parents,” urging them to “etch out some family play time.”

All parts of the campaign have the same goals, she says. “First, we’re driving brand health through awareness and relevance. And second, we’re driving sales.”

The battered chain needs all the help it can get. Experts say surviving bankruptcy depends on its ability to convince suppliers to stick with it through the all-important holiday period.

“Looking ahead, lowering debt and streamlining the business should help to create a more sustainable operation,” says Saunders. “However, even if the debt issues are solved Toys R Us still faces massive structural challenges against which it must battle. The jury is out as to whether it can adapt enough to survive.”