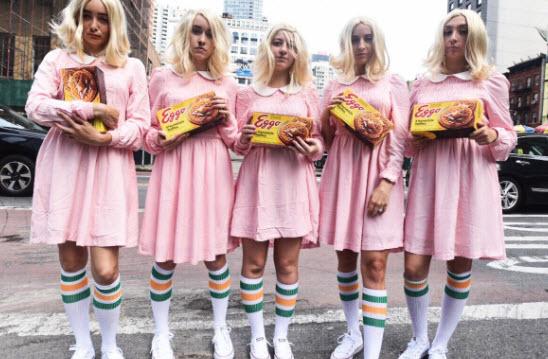 Eggo didn’t influence the writers, but the Kellogg brand is savvy enough not to look a gift show in the mouth.

First, it worked with Netflix to put a few seconds of what appeared to be a retro-style Eggo TV commercial at the start of Netflix’s Super Bowl ad promoting Season 2 of “Stranger Things.”

That ad (below) has pulled more than 16.5 million views and more than 13,000 comments on YouTube since its debut during the game.

Now, as the Oct. 27 Season 2 premiere finally approaches (469 days after its original debut, according to one fan site), Eggo is geared up for more exposure on the show.

Although the brand continues to have no input in the show, and will have no paid integrations or commercials, according to a rep, Eggo has cooked up a barrage of show tie-ins with Netflix’s approval or cooperation.

During New York Comic Con in the first week of October, Eggo unleashed a multitude of “Elevens” (above) to hand out watch party kits that included waffles and a microwavable syrup server.

It also created a custom toaster — bearing the saying “Mornings are for Eggo and contemplation” along with the Eggo and “Stranger Things” logos — to distribute to select media and super fans.

During the Season 2 red carpet premiere on Oct. 26, guests will be able to visit an Eggo waffle food truck offering custom waffle dishes, decorated with spooky lighting and staffed by servers in get-ups drawn from the show’s 1980’s period setting.

Meanwhile, the brand will use social media and its website to host and promote several other show-related items, including:

*A nine-course waffle menu designed for viewing parties or binge-watching sessions. Each of the nine episodes has a corresponding dish themed around the title of an episode.

*DIY step-by-step instructions to transform an Eggo waffle box into an Eleven Halloween costume accessory, like a flashlight or purse.

In addition, later this year, Eggo will get a branded card game through a licensing deal between Netflix and Hasbro that will also produce “Stranger Things”-themed Monopoly and Ouija Board games.