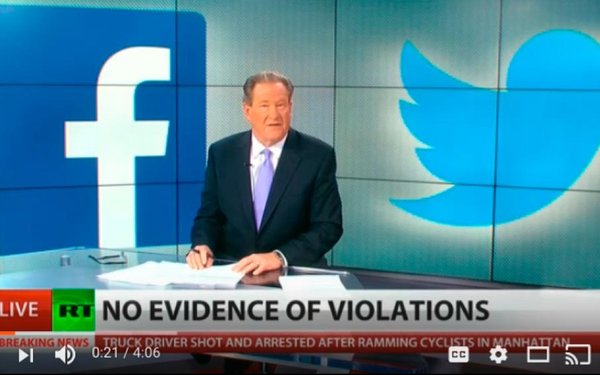 Asked by Senator Joe Manchin if their organizations allow Russia’s RT network to “buy space or advertising on your accounts,” only one of the Big 3 digital platforms said it does not.

“That’s effective as of when?” Manchin asked.

“That was effective as of a week of so ago,” Edgett confirmed.

When it came to Google and Twitter, representatives from those platforms demurred, indicating they have found no reason to block Russia’s RT network.

“We have reviewed the RT accounts. And as you know, RT advertises extensively in newspapers, magazines, airports across the United States,” Google Senior Vice President-General Counsel Kent Walker said, adding, “We’ve not found violations of our accounts, but we are focused on making sure there’s enhanced transparency with regards to government-funded broadcasting, whether that’s RT or Al Jazeera or other sources.”

“Well, it says here that RT uses Google’s YouTube, Facebook and Twitter as their main distributors of their content,” Sen. Manchin continued, reading from a document, and adding, “So you all have been their main go-to to get their propaganda out to the United States to do harm to us?”

It was about that point that this reporter, who was watching the hearings live via PBS “News Hour’s” feed on Google’s YouTube, glanced over to the video distribution platform’s right-hand “Up Next” recommendation rail, and noticed two RT News reports recommended there.

The first one was headlined, “Social Media Hearing: What did the senators learn?,” and ranked No. 12 in the lineup. It featured an American-looking news anchor who led with, “Meanwhile, Google has already released as statement today clearing RT, this network, of wrongdoing on policy violations.”

He introduced an Asian-American-looking reporter who said, “The hearing ran for almost three hours and turned up nothing new or different than what each of these social media giants had already released to the press and to the public all on their own in the days leading up to this very hearing.”

The second RT video, which ranked 16th in the recommendation feed, was labeled, “No evidence of RT manipulating YouTube during US election – Google,” and featured a British-accented female anchor, who led with, "Google says it hasn’t found any evidence of RT policy violations on its platforms. The findings are part of a detailed report released by the company into the alleged meddling in the 2016 U.S. election.”

Both the RT videos were posted Oct. 31 and were on verified RT accounts, but it wasn’t clear whether their placement, ranked there organically, were paid for or otherwise amplified as part of a paid media buy.

During his statements, Sen. Manchin said Russia spends $190 million per year on the distribution and dissemination of RT and that Google's YouTube, Facebook and Twitter are its top U.S. media outlets.