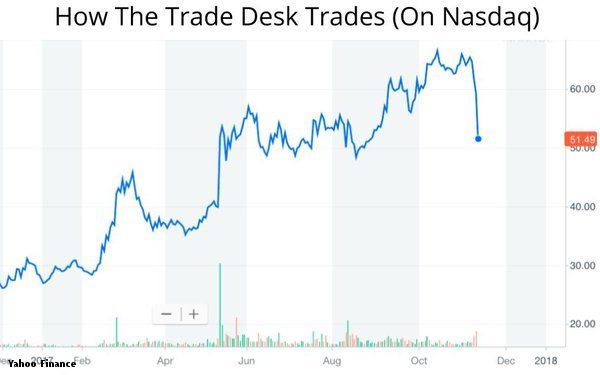 The Trade Desk has emerged as the preferred DSP for trading programmatic inventory at many top agencies and brands, but its own trading showed mixed results following news of tepid results during the third quarter. Shares of TTD fell more than 20% in after hours trading on Nasdaq, and were off nearly 4% at Thursday’s stock market closing after the publicly traded company reported “softness from some larger advertisers.”

TTD did not disclose who those advertisers were, but some of the ad world’s biggest have begun signaling a retraction on their programmatic media-buying over the past year, especially No. 1 advertiser Procter & Gamble.

“Some large advertisers [are] being more deliberate in their spend (e.g. CPG/retail),” Raymond James equity research team cited in a note sent to investors early this morning. “While we believe we may see less near-term upside as a result, we believe TTD remains well positioned headed into 2018 given strong signings including two of top four advertisers signed in the last 12 months and three key wins in the third quarter.”

Despite quarterly softness, the analysts reiterated its “Outperform” rating for TTD’s stock, citing the size and growth of the programmatic advertising marketplace, TTD’s underlying technology and the equity firm’s projection that it will generate 20% or better long-term revenue growth with healthy margins.

“TTD believes this slowdown is transitory and believes it remains well positioned going into 2018 as advertisers increasingly turn to programmatic and several key client wins in 2018,” the analysts wrote.