Crabby Columnist To TV Biz: No Thanks! 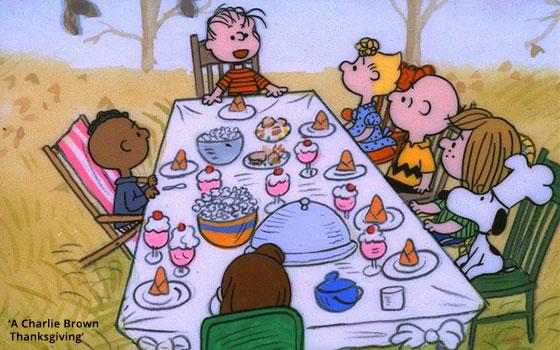 One of the most clichéd columns or blogs published or posted on the eve of Thanksgiving is the “giving thanks” column.

This is the one in which the writer pretends to be “grateful” for various things -- such as the political columnist who “thanks” various politicos for the bounty of subjects these hapless lawmakers provide for columnists to expound on, or the journalist on the TV beat who gives his or her “thanks” for TV shows he or she likes or just moments seen on TV that were particularly skillful or moving in their execution.

We've all done them, and speaking for myself, I can tell you that these pre-Thanksgiving columns can be at least partially sincere, while also designed to come across as tongue-in-cheek -- light entertainment, you might say, to help usher in a long holiday weekend.

And I suppose I could contrive such a column this year too, but truth be told, I'm not feeling it. The flood of sex-harassment stories, the noisy, empty theatrics of partisan opinionated talk shows that masquerade as “news,” and all of the unchecked violence, sex, profanity and just plain misery depicted on countless TV shows today don't have me feeling very thankful for TV lately.

Take the sex-harassment stories, for example. So many of them involve people who are supposed to know better or stand for something -- newspeople such as the late Roger Ailes and Bill O’Reilly, and most recently Charlie Rose, of all people.

In the statement Rose released Monday in the aftermath of the Washington Post exposé that detailed all of his naked, handsy behavior with at least eight women, he actually said this: “ In my 45 years in journalism, I have prided myself on being an advocate for the careers of the women with whom I have worked.” Give me a break.

Going back a-ways, there was Bill Cosby, who was positioned for 30-plus years in the public imagination as “America's dad” because of his TV shows.

The actual truth about Cosby and all the others, based on their public images, just takes your breath away. Thanks, TV stars, for making incurable cynics out of all of us.

Meanwhile, we live in a nation experiencing deep divisions in opinion. So what does TV do? It fans the flames every night in the form of opinionated talk shows on the three news channels.

In case you didn’t know, this is one of the meanings of the phrase “fake news” -- mainly, data (tidbits, items etc.) whose factuality is questionable but that get spouted as fact by talk-news personalities in the “heat” of battle.

The noise, the misinformation and the so-called “expert” guests who comment on myriad subjects they know nothing about has made TV news even less reliable than ever, if such an achievement was even possible.

As for the content issues cited above -- violence, sex, profanity and human misery -- I have long struggled to make my peace with these, especially since they are all here to stay, for better or worse.

I have written on the subject for years -- decrying the excesses of some shows, while praising others for the high quality of those very same excesses. Clearly, it's a complicated subject.

Nowadays, so-called “edgy” content garners the lion's share of critical acclaim, wins all the prestigious awards and even draws audiences in numbers that networks and streaming services can profit from (apparently).

Ironically, it's an unfortunate side-effect of the high-quality of production that goes into making many TV shows today. They're better made and therefore more realistic in their tone and content.

As a result, when we interact with TV today, we find ourselves confronted by all the ills of the world in a manner that is more realistic than ever. Watching so much of it can be a draining, depressing experience.

That's another phenomenon that I have written about for years -- from the standpoint of one who makes his living watching television. Come to think of it, that's something to be thankful for on this Thanksgiving Eve -- that I still have an opportunity every day to write about television, whether I like it or not.

tv
1 comment about "Crabby Columnist To TV Biz: No Thanks!".
Check to receive email when comments are posted.
Next story loading