A Final Farewell To 'Fashion Police' And Joan Rivers 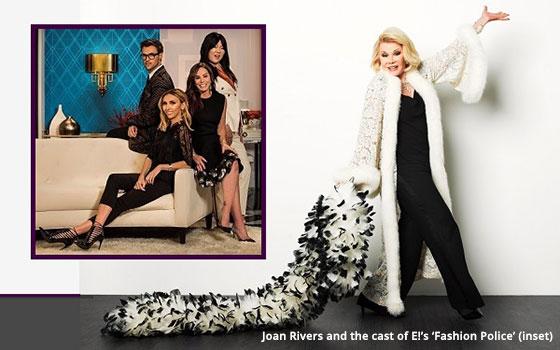 You can be forgiven if you were under the impression that E!’s “Fashion Police” had left us a long time ago.

But it had not left officially. That happens Monday night (November 27) with the airing of a prime-time retrospective special on E! titled “Fashion Police: The Farewell.”

Understandably, the special is as much a celebration of Joan Rivers as it is a look back at the show itself.

For all intents and purposes, she was the show, even if it did continue for more than three years following her death in September 2014 -- mostly as a series of specials following awards telecasts.

The timing of this special means “Fashion Police” will make its exit before the upcoming awards season. That’s as big a sign as any that as far as E! is concerned, “Fashion Police” has run its course.

Some might call it the end of an era, although that would attach a level of cultural importance to this show that it never really earned. As this retrospective show demonstrates, “Fashion Police” was proudly and unabashedly trashy -- trash-talk about (sometimes) trashy clothes.

It was the perfect environment for Rivers, who was already 77 when the show premiered in 2010. Here was a place she could come to regularly and try out her decidedly well-aged style of comedy -- which had been honed in 1960s nightclubs -- on younger audiences.

They seemed to take to it too, especially since Joan came endorsed by a number of younger, mostly female comics who all held her in high esteem and positioned her in their public statements as the pioneer femme comedian who paved the way for all of them.

However, the comedy of Joan Rivers was not necessarily easy to like. Call it an acquired taste that not everyone acquired. She could be very rough, and anyone not used to straight-up profane stand-up comedy could very well be stunned at the things she said.

This was particularly true when she appeared on the concert stage where there were no limits and no censorship on what she said or did.

But it was also true to a great degree on “Fashion Police” because the show came along at a time when traditional content standards and practices were slipping away and largely disappearing from television generally.

For Joan Rivers on “Fashion Police,” it meant using a lot of f-words (which were still bleeped out) and making so many jokes about vaginas that that in itself became a running joke on the show -- i.e., when, or at whose expense, would Joan's next vagina joke pop up?

Monday night's Joan Rivers/”Fashion Police” retrospective will appeal mostly to the many people who revered her -- which amounts to quite a lot of people. In a way, this special serves as her swan song. After this, there will be no more farewell specials for Joan Rivers.

After all is said and done -- and all she said and did -- what more can anyone say?