Trump's On The Right Track With His 'Fake News Trophy' 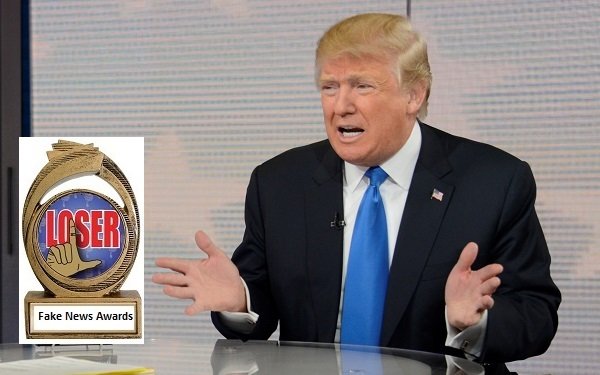 It's such a great idea that I wish I'd thought of it: A year-end awards show to award “Fake News” trophies to deserving TV news organizations.

This million-dollar idea was the brainchild of none other than Donald Trump, otherwise known as America's master showman.

The tweet he posted earlier this week in which he floated this idea was one of his best. And yet plenty of critics crawled out of the woodwork to air the usual gripes that in their view he was behaving once again in a manner unbecoming of a U.S. president and the like.

On this oft-repeated theme, my philosophy goes like this: He is the president, therefore his behavior, by definition, is in the manner of a U.S. president -- if and when the president happens to be him.

“We should have a contest as to which of the Networks, plus CNN and not including Fox, is the most dishonest, corrupt and/or distorted in its political coverage of your favorite President (me),” Trump tweeted. “They are all bad. Winner to receive the FAKE NEWS TROPHY!”

The floor is now open for nominations.

What's not to love about this tweet? My favorite part is where he refers to himself as “your favorite President (me).” He is unique, is he not?

Generally speaking, the president is correct about TV news, even if the term “fake news” is not necessarily the best or most accurate brush with which to paint an entire industry. (Plus, it's not fair that he gives Fox News a pass, although it's obvious why he does so.)

Having said that, it is also true that a great deal of what that industry produces certainly qualifies as “fake” or at the very least, not news. Is “un-news” a word? Maybe it should be.

The “fake news” phrase does get the point across, however. And that point is that if you are looking for real information whose accuracy is reliable, then TV news is not the place to go most of the time.

The exceptions are those times when news breaks that is so important that the news channels (and sometimes the broadcast networks) drop everything else and go wall-to-wall on the story. These include natural disasters, terrorist attacks and other big stories.

But most of the time, Trump's right, folks. TV news is lame, and you don't have to be Donald Trump to have figured this out.

All you have to do is tune in and out of the cable news channels and perhaps your local TV newscasts and you will notice gaffes, miscues, misspellings, misidentified locations (often cited differently on different channels), interview subjects with the wrong names plastered beneath them, dropped audio, robotic studio cameras running amok and heaven knows what else.

Sure, technical problems are not necessarily classifiable as “fake news,” but any element that stands in the way of a TV news consumer getting the straight dope is a contributor to the whole general impression that news is faked or (again) at the very least inaccurate.

Take local news. Here in New York, the evening's array of the same crime stories from various sections of the Bronx, Brooklyn and Queens all get reported as having taken place in different parts of these boroughs, depending on the station.

“Melrose section of the Bronx,” “Belmont section” -- they are all interchangeable to the unpaid interns who apparently run New York's local TV newscasts.

On these broadcasts, interview subjects who are obviously male will be shown with a woman's name (and vice versa).

On one channel, the victim of an attack such as a shooting might be reported to be in a hospital in critical condition. On another channel, the same person is reported to have received only minor injuries and is already home and on the mend. Which story is true? Who knows? I have seen this happen with my own eyes.

As for the cable news channels, at the risk of repeating myself from past columns, the fakery here stems from the constant talk segments featuring guests who know no more about a situation than you or I, but are invited to offer their comments on the panel-talk shows anyway.

While the expertise of these folks can vary -- from those who might know a thing or two all the way down to those who are faking it -- I know from personal experience that there are plenty in the latter group who go on TV every day who absolutely do not know what they are talking about.

A “Fake News Trophy”? Better order a couple dozen of them. Like a baseball game featuring teams of little kids, everybody gets one.