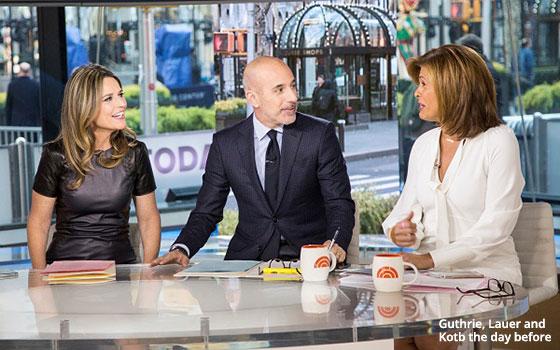 That's the key question that must be occurring to just about everyone -- whether they work in the TV business or simply watch TV -- in the wake of the news we all woke up to on Wednesday morning that Matt Lauer was the latest high-profile media personality to be caught up in the sex-harassment dragnet.

Holy cow! Matt Lauer? Someone close to me heard the news and commented that pretty soon there will be no men left on TV. It is certainly beginning to seem that way.

And yet, despite the growing roster of prominent and/or powerful men who have been disgraced recently by sex-harassment allegations and revelations, it is still surprising when some new one comes along who you didn't expect.

Matt Lauer is such a person, as was Charlie Rose a week earlier. It seems coincidental that they both happen to have been stars of competing network morning shows. Their dismissals in no way indicate that someone from “Good Morning America” must be next. That's not logical.

Lauer's sudden departure is a shock because it goes against the image that he and NBC took decades to establish and maintain.

More than most other television dayparts you can name, morning TV is especially intimate. A morning show's success is based on a hard-to-define comfort level that an audience has with a group of TV personalities who the audience permits to enter their homes at this very private time of day.

Developing this friendly, familial comfort level takes years. Matt Lauer was one of these people who just seemed like the nicest guy around: Friendly, self-deprecating, serious when it came to news and conducting newsmaker interviews -- in short, the whole package.

And it (almost) goes without saying, but Lauer -- and the consistency of Lauer (and others such as Al Roker) being there for so long -- is one of the big reasons why “The Today Show” enjoys the success that it has.

Another reason for the success of a show like “Today” is the high standard of professionalism that seems to be practiced in such an environment. It's one reason why revelations of sexual misconduct attributed to Lauer are so surprising.

We tend to think of places such as “Today,” NBC News and CBS News as buttoned-down places where self-discipline reigns. Then we learn that an aging anchorman (Rose) used to enjoy walking around naked in front of female underlings (allegedly). It just boggles the mind, doesn't it?

Professionalism was certainly on display Wednesday when Savannah Guthrie and Hoda Kotb came on “The Today Show” at 7 a.m. and reported the story of their long-time colleague's dismissal directly, clearly and with just the right amount of sympathy.

After all, he was their friend, and according to at least one of them (I think it was Savannah), the two had just learned of Lauer's termination mere minutes before they went on the air. In that context, their poise and professionalism was even more impressive. (The photo above shows all three of them on “The Today Show” just a day earlier).

The seeming abruptness of Lauer's termination is also a thing of wonder (as was, again, Rose’s last week). One minute, they are among the best-known and ubiquitous personalities in all of media. And the next minute, they are gone -- keys and identification cards turned in (presumably), offices emptied of personal effects, swept, cleaned, their names chiseled off the glass door like a scene in an old movie.

And that's that. As far as the rest of the world is concerned, Matt Lauer and Charlie Rose are no more. Both companies -- NBC and CBS -- evidently felt confident enough in the veracity of the charges leveled against both of them that abrupt, immediate dismissal was the only recourse.

The final month of 2017 is upon us. Look for sex-harassment and its consequences to top every year-end list of the top news stories of the year.